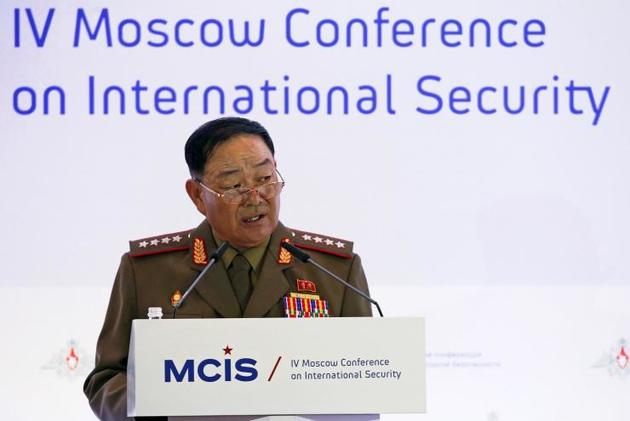 SEOUL, South Korea - North Korea has for the first officially confirmed the purging of its defense chief Hyon Yong-chol, two months after South Korea's intelligence reported that he was killed by anti-aircraft gunfire for talking back to dictator Kim Jong Un.

However, Hyon's execution remains unverified even as North Korea's state media has not mentioned about him or his disappearance since May.

Over the weekend, the country's official Korean Central News Agency named army general Pak Yong Sik as the armed forces minister in a dispatch about a meeting with a Lao military delegation.

KCNA televised the meeting between the military delegations of North Korea and Laos and it included a moment where Pak was introduced as North Korea's new defense chief.

Pak, known as a top official at the General Political Bureau of the Korean People's Army, is considered one of Kim's closest associates and is among the officials who have accompanied Kim on various public activities mentioned in state media

"The North introduced Gen. Pak Yong-sik as its armed forces minster, so we can see this as confirmation that Hyon has been purged and replaced," Jeong told reporters.

Jeong said reports of Hyon's execution were to be viewed as rumors, until there is more definitive evidence of his death.

Kim was reported to have dismissed Hyon after being outraged by his "disregard" for the North Korean leader during a meeting in May this year. Among other reasons for death sentencing included falling asleep at military events. His execution was suspected to have been carried out with an anti-aircraft gun.

"Usually, the promotional course of political officials and military officials are separate, but in the case of Pak, a political official was appointed head of the military," Cheong Seong-chang, director of the Unification Strategy Studies Department at the Sejong Institute, was quoted as saying by daily Korea Joongang.

"Pak's promotion can be interpreted as Kim Jong-un's aim to firmly dominate its military through its Politburo," he said.

Since taking power after the death of his dictator father Kim Jong Il in December 2011, Kim is alleged to have orchestrated a series of executions, purging and personnel reshuffles in what outside analysts say is an attempt to bolster his grip on power.

The most notable execution before Hyon's happened in 2013 when Kim had his uncle and No. 2 in the kingdom, Jang Song Thaek, executed for alleged treason.

WASHINGTON D.C.: The U.S. Justice Department has announced it will appeal a court ruling that the federal prohibition on evictions ...

No one hurt in Sunday's California quake

SAN FRANCISCO, CA: Small earthquakes reaching magnitude 3.7 were felt along California's Central Coast after midnight on Sunday, according to ...

WASHINGTON DC: Speaking to reporters on Sunday, Dr. Anthony Fauci said he would not hesitate to be inoculated with the ...

McKesson to have 4 vaccine distribution centers for one-shot vaccine

WASHINGTON D.C.: As preparations are underway to begin shipping Johnson and Johnson's COVID-19 vaccines this week, reports have been released ...

The winter storms that swept across the U.S., particularly Texas, upending the energy market and knocking out power for millions ...