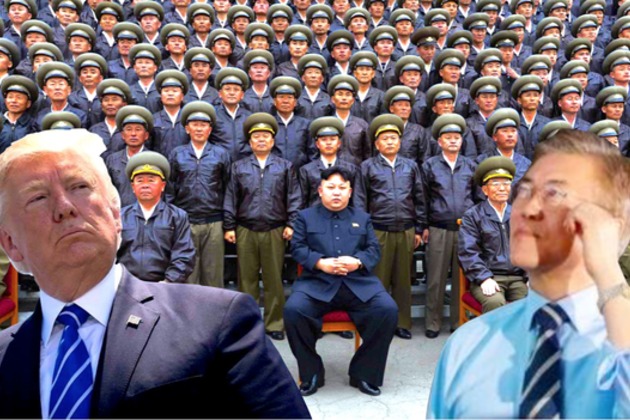 SEOUL, South Korea - As sabre-rattling continues between Washington and Pyongyang, Seoul is bracing for an October shockers from its nuclear active neighbour.

On Thursday, North Korea claimed that 4.7 million of its citizens had volunteered to join or re-enlist in the military since the country's leader threatened to "tame" President Trump "with fire" last week.

Meanwhile, preparing for the horrors that await, the U.S. has now agreed to begin regularly deploying its 'strategic assets' to the Korean Peninsula.

The South Korean government said that the decision was made as North Korea's testing of long-range missiles and nuclear weapons puts the region on high alert.

The announcement was made by the chief of South Korea's National Security Office, Chung Eui-young after his meeting with South Korean President Moon Jae-in and leaders of other political parties.

Chung told the political leaders that, "The U.S. has pledged to expand the rotational deployment of its strategic assets near the Korean Peninsula."

According to the Yonhap News Agency, Chung's discussion with political leaders revolved around whether there was "any crack" in terms of trust between the security allies.

He said, "[The deployment] will begin as early as late this year, and this will help us expand our defense capabilities."

While neither sides have specified the nature of these strategic assets, experts believe the terminology usually refers to stealth planes, long-range bombers and ballistic-missile submarines.

While the U.S. Pacific Command has not made any official comments, a ruling party spokesman in Seoul reportedly said that the U.S. has made its pledge in writing.

Meanwhile, with the anniversary of the founding of the North Korean communist party and China's all-important Communist Party Congress lined up next month, South Korea is said to be expecting more provocative acts by North Korea in October.

Chung added that the discussions with Moon on Thursday also involved talks on Pyongyang's possible provocations around October 10 and 18.

Park Wan-ju, a lawmaker and head spokesman of the ruling Democratic Party said that the report prepared by the South Korean security adviser also pointed to the risk that a military conflict could by sparked by "accidental incidents."

North Korea has accused Trump of declaring war, following his warning on Twitter that Kim's regime would not last if he persisted in threatening the U.S. and its allies.

The same week, Trump even warned that North Korea would be totally destroyed in such an event and at the same time, Pyongyang hasn't backed down on its dramatic threats either.

Commenting on whether China had a plan to respond to an emergency in North Korea, Chinese defense ministry spokesman Wu Qian said, "Military means cannot become an option."

Qian has urged for talks to resolve the issue."

He added, "The Chinese military will make all necessary preparations to protect the country's sovereignty and security and regional peace and stability."

Meanwhile, as the region braces for possible provocations, North Korean government declared on its state media on Thursday that millions of its citizens were signing up to battle Trump and his country.

The Rodong Sinmun newspaper reported that millions of young men and 1.22 million women said they wanted sign up to counter the U.S. since Friday.

According to South Korean news agency Yonhap, Pyongyang has previously claimed that North Koreans have volunteered to join the military as part of propaganda campaigns to boost solidarity.

Pyongyang's report noted that the North Korean military enlistment came after Kim Jong Un issued a statement on Friday warning, "I will surely and definitely tame the mentally deranged U.S. dotard with fire."