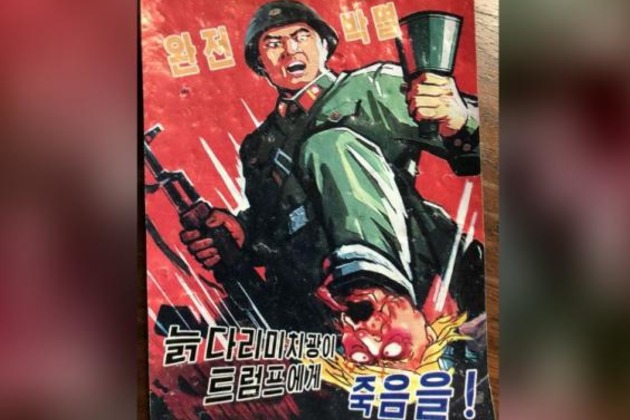 PYONGYANG, North Korea - On Tuesday, North Korea's Deputy UN Ambassador Kim In Ryong told the General Assembly's committee on disarmament that the situation on the Korean peninsula "has reached the touch-and-go point and a nuclear war may break out any moment."

The reclusive nation said that it will never negotiate the dismantling of its nuclear weapons unless the United States reverses its "hostile" policy.

Ryong said, "The situation on the Korean peninsula where the attention of the whole world is focused has reached the touch-and-go point and a nuclear war may break out any moment. As long as one does not take part in the U.S. military actions against the DPRK (North Korea), we have no intention to use or threaten to use nuclear weapons against any other country."

He added, "Unless the hostile policy and the nuclear threat of the U.S. is thoroughly eradicated, we will never put our nuclear weapons and ballistic rockets on the negotiation table under any circumstance."

The leaflets distributed in the region featured colorful caricatures of U.S. President Donald Trump being trampled and lampooned by North Korean soldiers.

The propaganda flyers are believed to be out of North Korea and declare the erratic U.S. president to be a "mad dog" and call for the death of the "old lunatic Trump."

The leaflets dropped near the South Korean Presidential palace show a dog caricature of President Trump being held by its feet as he is being decapitated.

It claims, "Let's behead mad dog Trump for the future of a peaceful and warless world and mankind."

Another pamphlet showed a North Korean soldier crushing Trump's head underfoot, along with a stencilled text that declares, "Complete obliteration."

Another leaflet shows a doglike Trump behind a UN podium with a missile in his mouth, under the declaration "totally destroy North Korea."

The pamphlets also carry slogans like, "We need to give death to old crazy man Donald Trump," and "complete extermination."

The balloons reportedly drifted across the border at night and burst once over Seoul.

Meanwhile, on Tuesday, hours after Pyongyang warned that a nuclear war might break out at any moment, U.S. Deputy Secretary of State John J Sullivan said that the U.S. is not ruling out the eventual possibility of direct talks with North Korea.

For months now, China has been urging the U.S. and North Korea to find a diplomatic solution, more so because it fears a refugee crisis breaking out at its border with Pyongyang and chaos across the region.

However, U.S. and its ally Japan have been reluctant to sit down at the table while Pyongyang continues to pursue a goal of developing a nuclear-tipped missile capable of hitting the United States.

After talks with his Japanese counterpart, Sullivan said in Tokyo, "Eventually, we don't rule out the possibility of course of direct talks. Our focus is on diplomacy to solve this problem that is presented by the DPRK. We must, however, with our allies, Japan and South Korea and elsewhere, be prepared for the worst, should diplomacy fail."

On Monday, South Korea and the United States began week-long joint Navy drills in the waters around the Korean peninsula, involving about 40 ships from both militaries, including the nuclear-powered USS Ronald Reagan aircraft carrier.

Responding to what the North believes is preparation for war by Seoul and Washington, the country's state media said on Tuesday the allies' "desperate efforts" to block the advance of the country would only vindicate that it should continue its nuclear program "to the last."

The official KCNA news agency said in a commentary, "The DPRK has been fully ready for all the U.S. is resorting to, including sanctions, pressure and military option, as it has the tremendous nuclear force for self-defence and irresistible strength of self-reliance and self-development."

Commenting on North Korean envoy's warning of nuclear war, Chinese foreign ministry spokesman Lu Kang said it would not be in anyone's interest.

He said at a news briefing, "China still hopes that all parties, in this situation where things on the Korean peninsula are highly complex and sensitive, can exercise restraint and do more to benefit the lowering of tensions in the region."