North Korea claims Trump is begging for a nuclear war 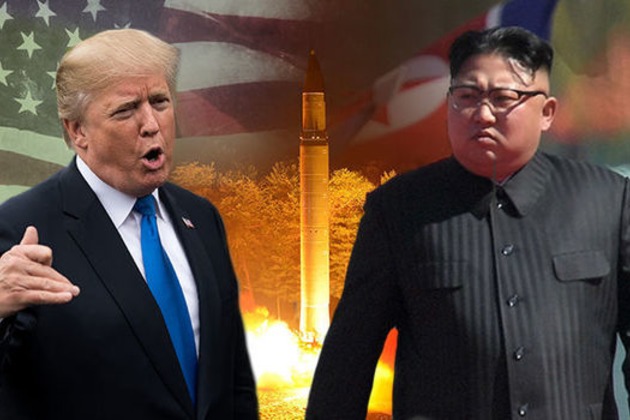 PYONGYANG, North Korea - In its latest accusation levelled against the U.S., North Korea's Foreign Ministry said on Saturday that the U.S. President was a "nuclear demon" who was "begging for nuclear war."

The reclusive country's Foreign Ministry said that Trump is "staging an extremely dangerous nuclear gamble on the Korean peninsula."

In a written statement, a North Korean Foreign Ministry spokesman called Trump a "nuclear demon" and a "disruptor of global peace."

North Korea's comments came ahead of a joint U.S.-South Korean military drill, that is scheduled to begin on Monday.

As part of the drill, known as Vigilant Ace, about 12,000 U.S. military personnel and 230 planes will participate in the militant exercises.

In similar comments made last month, North Korea published a furious commentary in its state-run newspaper saying Trump had displayed his "true colors as an old lunatic, mean trickster and human reject" during his visit to the Korean Peninsula.

Soon after the comments were published, Trump placed North Korea on the list of state sponsors of terrorism after George W. Bush removed North Korea from that list in 2008.

Following the missile launch, Trump said on Twitter earlier this week that "additional major sanctions will be imposed on North Korea."

After the launch, the U.S. even urged other countries, especially China, to squeeze North Korea's economy to make Kim Jong Un back down from developing his country's nuclear weapons program.

However, despite China and Russia stressing on diplomacy, a North Korean official said that it was not interested in diplomacy with the U.S. until it had fully demonstrated its nuclear deterrent capabilities.

On Saturday, the U.S.-based North Korea monitoring website 38 North said that North Korea appears to be nearing the completion of a platform to test submarine-launched ballistic missiles (SLBM) which has been under construction at the Nampo Navy Shipyard.

38 North even unveiled satellite imagery taken on November 11, 16 and 24 of the shipyard located in Nampo, South Pyeongan Province on the west coast.

According to its analysis, North Korea's second testing platform for launching missiles underwater from submarines was seen aboard a floating dry dock and towed a short distance to an adjacent pier between the eleventh and the 24.

The platform is known as a "submersible ballistic missile test stand barge."

More than 100 nations have active force of military drones

Attack on Japanese base in 1938 carried out by Soviets, not U.S.

In 1938, the Americans took credit for an unprecedented Soviet air raid on a Japanese air force base in Taiwan ...

TEHRAN (Tasnim) - China on Wednesday defended the World Health Organization and lashed out at the US decision to withdraw ...

Bullying of International court and Bank of England laid bare

On January 9, 2020, Ambassador Karen Pierce-the United Kingdom's permanent representative to the United Nations-spoke at a meeting on the ...

SYDNEY, NSW, Australia - An extended rally in shares in mainland China lifted spirits across the Asian region on Thursday.Gains ...

QUEZON CITY, Philippines (PIA) -- Despite the global economic recession brought about by the COVID-19 pandemic, the Philippine economy remains ...

In the past month, there's been an outpouring of support for Black Lives Matter from America's largest corporations.You might have ...

NEW YORK, New York - Stocks in Asia were mostly on Wednesday, in line with the sell-off globally a day ...