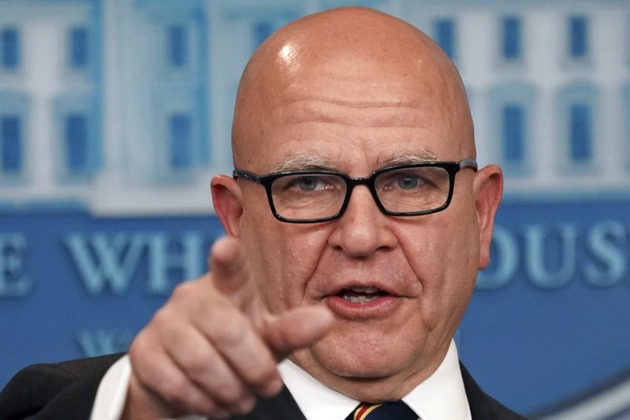 The White House national security advisor says the possibility of war with impoverished, but nuclear-armed North Korea is 'increasing every day.'

'There are ways to address this problem short of armed conflict,' H.R. McMaster said Saturday, 'but it is a race because he's getting closer and closer and there's not much time left,' in a reference to North Korean leader Kim Jong-un.

North Korea announced last week that it can now hit the U.S. mainland with a warhead, after its test-firing of a new intercontinental ballistic missile.

Media reports say the Pentagon is looking at U.S. west coast sites where additional defense systems can be installed, following the North Korean threat of a strike on the U.S. The Reuters news agency says the defenses would likely include Terminal High Altitude Area Defense (THAAD) anti-ballistic missiles, similar to those deployed in South Korea.

'The newly developed intercontinental ballistic missile Hwasong-15 has been successfully test-launched according to the political decision and strategic judgement of the Workers' Party of Korea," read an announcer Wednesday on North Korea's state-run KRT television.

Following previous launches, the North has claimed its projectiles can hit any part of the continental United States, but this would be the first time it would be able to do so with this new type of upgraded missile, which both North Korean and U.S. officials said could fly higher than the ones the country has tested earlier.

McMaster urged China to slap a total oil embargo on North Korea, as a way of deterring fuel missile launches. 'You can't shoot a missile without fuel,' he said.

The North's ruling party Rodong newspaper said Sunday the joint exercises are 'an open, all-out provocation against' North Korea that could 'lead to a nuclear war any moment.'

It is not clear if Pyongyang has mastered the capability of miniaturizing and mounting a nuclear warhead on an ICBM, which South Korean officials have said could happen within a matter of months.

Analysts also question North Korea's technical mastery of ICBM re-entry, which plays a key role in targeting. In the event of a launch at the U.S. mainland, U.S. missile defense systems would be employed.

More than 100 nations have active force of military drones

Attack on Japanese base in 1938 carried out by Soviets, not U.S.

In 1938, the Americans took credit for an unprecedented Soviet air raid on a Japanese air force base in Taiwan ...

TEHRAN (Tasnim) - China on Wednesday defended the World Health Organization and lashed out at the US decision to withdraw ...

Bullying of International court and Bank of England laid bare

On January 9, 2020, Ambassador Karen Pierce-the United Kingdom's permanent representative to the United Nations-spoke at a meeting on the ...

SYDNEY, NSW, Australia - An extended rally in shares in mainland China lifted spirits across the Asian region on Thursday.Gains ...

QUEZON CITY, Philippines (PIA) -- Despite the global economic recession brought about by the COVID-19 pandemic, the Philippine economy remains ...

In the past month, there's been an outpouring of support for Black Lives Matter from America's largest corporations.You might have ...

NEW YORK, New York - Stocks in Asia were mostly on Wednesday, in line with the sell-off globally a day ...