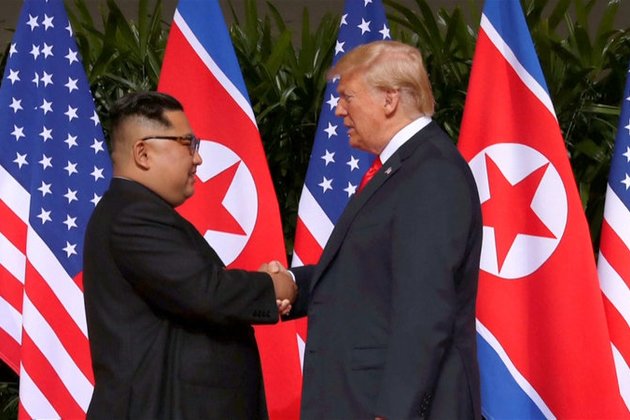 Yet, everyone witnessing it had predicted one big hurdle that is already confronting the two countries - the demand for sanctions relief.

With the Trump administration being slammed, both domestically and by International allies - over the vague agreement signed with North Korea during the Singapore summit, and Intelligence agencies indicating that the country is expanding its nuclear activities - the U.S. Secretary of State Mike Pompeo has maintained an aggressive stance, demanding action.

However, while the U.S. is demanding full, verifiable steps by North Korea to denuclearize, Pyongyang has demanded sanctions relief and a peace deal before taking any further steps.

According to senior diplomatic sources, the U.S. has made repeated proposals to North Korea on denuclearization, all of which have been rejected.

Sources quoted in reports have said that the U.S. has made, and continues to make, "specific proposals for starting and proceeding to the end point of fully verified denuclearization," including a timeline.

One of the sources reportedly stated that North Korea has rejected all of these proposals, considering them "gangster-like."

According to an official with close knowledge of North Korea's position on the matter, continued negotiations between the United States and North Korea hinge on Washington's willingness to make a "bold move" and agree to a peace treaty with Pyongyang.

Officials have stated that the U.S. has been asking for a big gesture on the part of North Korea, in the form of giving up a portion of its nuclear weapons in the near term.

However, Kim Jong Un is reportedly insisting that he will make a step towards denuclearization if the U.S. moves on security concerns.

Further, diplomatic sources quoted in reports stated that Pyongyang is looking for a goodwill gesture - citing one they made by halting missile testing and repatriating U.S. remains.

Now, North Korea has argued that the U.S. is backtracking.

The status of negotiations between the two countries also came to light after North Korea issued a statement at the United Nations on Thursday.

North Korea said that elements of the U.S. government are not adhering to the spirit of the dialogue established by Trump and Kim at their Singapore summit.

Further, Pyongyang said that while it had taken "such practical denuclearization steps as discontinuing nuclear test and ICBM test fire" and "broadminded measures" like the repatriation of U.S. Korean War remains, "the U.S. responded to our expectation by inciting international sanctions and pressure against (North Korea)."

The statement issued by North Korea's Foreign Ministry called the U.S. actions "shameless and impertinent behaviour," but notably did not blame Trump.

It singled out "some high-level officials within the U.S. administration," who it said were going against the President's will.

The statement also echoed criticism of previous administrations' approaches to North Korea and seemed intended to hit a target audience in the U.S.

The statement added, "Expecting any result, while insulting the dialogue partner and throwing cold water over our sincere efforts for building confidence which can be seen as a precondition for implementing the [North Korean]-U.S. joint statement, is indeed a foolish act that amounts to waiting to see a boiled egg hatch out. The international society is struck by this shameless and impertinent behavior of the U.S., and we also closely follow the U.S. behavior with high vigilance against their intentions."

Commenting on the current state of ties, the U.S. State Department said that the two countries are in contact with each other.

After Covid, parents opting for homeschooling for kids

WASHINGTON D.C.: Following the closing of the nation's schools during the Covid pandemic, more than 11 percent of all households ...

KANOSH, Utah: At least eight people were killed and ten injured in a 20-vehicle collision caused by a sandstorm Sunday ...

WASHINGTON D.C.: United Airlines is asking the federal government to reduce congestion at Newark Liberty International Airport, even as runway ...

ATLANTA, Georgia: Latest statistics released by the United States report that 340,363,922 doses of COVID-19 vaccines have been administered throughout ...

Amidst Covid, Olympics opener seen by fewest Americans in 33 years

WASHINGTON D.C.: The U.S. audience watching the opening ceremonies of the Tokyo Olympics was the smallest in 33 years.NBC's broadcast ...

WASHINGTON, D.C.: A federal appeals court on Friday reversed an earlier ruling and will let stand a ruling that prevents ...

NEW YORK, New York - U.S. stocks were mixed on Wednesday despite a widening of the U.S. trade deficit, offset ...

OCRACOKE, North Carolina: Drones were successful in delivering vital supplies to a remote North Carolina island during a test this ...

Lagging behind other airports, Heathrow tells UK to reopen travel

LONDON, England: London's Heathrow Airport is not recovering passenger traffic as quickly as other airports in Europe and has urged ...

Vatican shortfall less than projected due to spending reductions

VATICAN CITY: The Vatican reports that it closed out 2020 with a deficit of $78 million, which was better than ...

TORONTO, Canada: Air Canada is projecting increased domestic and U.S.-bound flight bookings by this winter as travel restrictions ease.At the ...