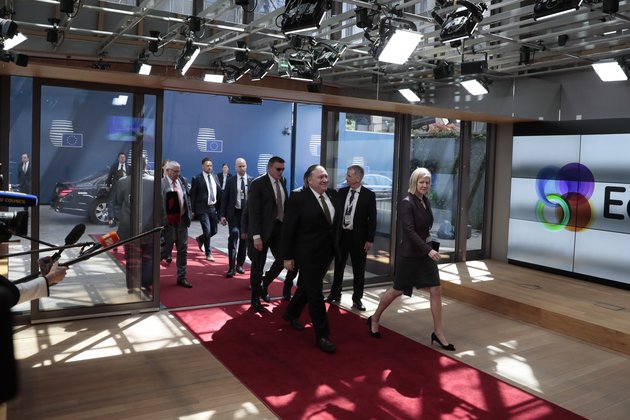 The effort by European countries to craft a workaround for businesses to bypass reimposed U.S. sanctions on Iran is unlikely to be successful, say diplomats and analysts, and has been made more difficult by Tehran's breaching of an internationally-agreed cap on its Uranium stockpile.

The financial mechanism crafted by European signatories to the Iran nuclear deal, co-signed by President Donald Trump's predecessor, Barack Obama, in which Tehran agreed to curb its nuclear program in return for sanctions relief, won't compensate Iran sufficiently, even if it gets working, for the loss of trade and oil sales, they say.

President Trump withdrew the U.S. last year from the agreement, citing concerns that Tehran had done nothing to curtail expansionist behavior in the region and was still determined to eventually build nuclear weapons.

Difficult to get around US sanctions

The bid to bypass the strict American sanctions on Iran, which effectively prevents Iran from accessing Western financial markets, has been met with skepticism by many European businesses. That doubt is likely to mount now that Iran has breached the limit on its Uranium stockpile stipulated by the Iran nuclear deal, or Joint Comprehensive Plan of Action (JCPOA).

The International Atomic Energy Agency, the UN's nuclear watchdog, confirmed Monday that Iran has deliberately breached the JCPOA 300kg limit on its enriched Uranium stockpile. Tehran announced last month that it would start exceeding the cap in protest at reimposed U.S. sanctions and as a way to persuade the Europeans to do much more to ease the impact of the sanctions on the Iranian economy.

Iranian officials have also warned that they intend to start enriching Uranium to a higher purity of 20 percent by July 7, still short of weapons-grade quality, which is 90 percent.

European businesses were wary enough before the stockpile breach, fearing that if they continue to trade with Iran they will fall afoul of the Trump administration, which has warned it will punish companies attempting to skirt U.S. sanctions. The threat itself has been enough to scare off many businesses, according to trade consultants.

That point was noted to reporters Friday in London by Brian Hook, the U.S. special representative for Iran.

"We have not seen any demand for [European] companies doing business in Iran, because they would much rather do business in the United States market than do business in the Iranian market. If you look at trading volumes, the EU does more trade with Kazakhstan than it does with Iran," he said.

Known as INSTEX (Instrument in Support of Trade Exchanges), the Europeans' workaround mechanism was announced as operational last week by France, Germany and the United Kingdom, all co-signatories to the 2015 Iran nuclear accord. Russia and China are also signatories to the deal.

The mechanism is meant to enable European companies and Iranian companies to trade without interacting financially, so no dollars exchange hands, bypassing the U.S. financial system through a complex barter system.

Oil trade most important to Iran

INSTEX is meant to focus on trade in essential goods initially - food, medicine, humanitarian aid - but Iran has already said it won't be enough to persuade it to return to compliance. It wants the Europeans to make oil purchases - something INSTEX was never designed to do.

"The Europeans are basically trying to placate them by setting up this trade mechanism. It's basically a barter trade system. They [the Iranians] had high expectations that it could handle such things as oil, which we saw as unrealistic," said Henry Rome, Eurasia Group analyst on Iran.

Tehran is suspected of smuggling crude oil exports to China, but most of its oil revenue has dried up since the reimposition of U.S. sanctions.

For many companies the risk of being shut out of the U.S. market, and of being caught in the middle of an escalating confrontation between Washington and Tehran, outweighs any short-term benefits from trading with Iran. Further heightening the risk for European businesses is that the ownership of most of Iran's top companies are tied to Iranian government entities, such as the Islamic Revolutionary Guard Corps, which have been specifically targeted by the U.S. sanctions regime.

Iran's Uranium breach has been denounced by Washington. President Trump tweeted that Tehran was "playing with fire." It places the European signatories in a dilemma - do they move now to reimpose sanctions themselves or continue with efforts to persuade Iran to move back into compliance with JCPOA, hoping to save the accord?

"The Iranian breach is aimed at doing two things," says a British diplomat. "To make the Europeans pick between the U.S. and Iran - and that is an overplay; and to copy North Korean brinkmanship, hoping that will trigger talks between Washington and Tehran," he added.

Britain's foreign secretary, Jeremy Hunt, said in a statement that he's "deeply worried" by Iran's move, but added the British government remains committed to the accord and is eager to "de-escalate regional tensions." But he placed the emphasis on Iran to save the deal, saying, "I urge Iran to avoid any further steps away from [the nuclear deal] and come back into compliance."

In recent days Britain has sharpened its tone towards Iran, the result, diplomats say, partly of talks during the American President's recent visit to London, but also because of aggressive Iranian actions, which have included shooting down a U.S. surveillance drone and, according to the Trump administration, mining half-a-dozen tankers in the Gulf of Hormuz. Tehran has denied it has mounted any attacks on shipping.