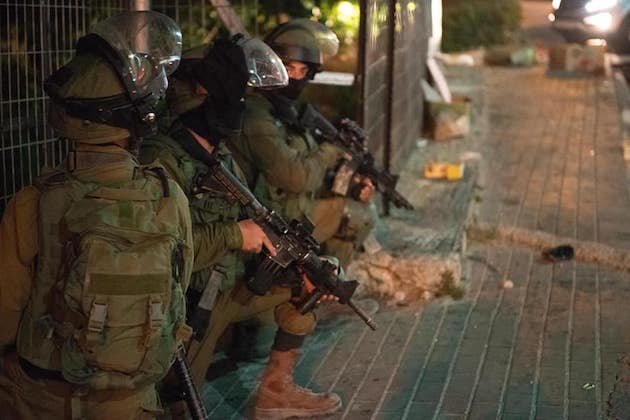 The ministry said a fourth Palestinian was injured and was taken to hospital, after the Israeli attack which involved a helicopter gunship and a tank.

"We just identified a number of armed suspects from Gaza approaching the security fence with Israel. We fired toward them," the Israeli army said in a post on its Twitter account.

"A short time ago, an IDF force identified a number of armed suspects near the Gaza perimeter fence," the IDF Spokesperson's Unit said in a statement inpublished on Sunday, adding that "an IDF attack helicopter and tank shot at them."

The three were identified by the Palestinian health ministry as Mohammed al-Taramsi, 21, Mohammad Abu Namous, 23, and Mahmoud al-Walaydeh, 22.

No group claimed responsibility for the attempt by the 3 Palestinians to breach the border fence, with one of the resistance groups, PIJ describing them as "a group of angry youths."

According to The Jeruslaem Post, PIJ issued a statement saying Israel is fully responsible for "it's heinous crimes against the Palestinian people" and that the group reserves "the right of our people to resist and confront all forms of Zionist agression."

The group stressed that "the crime of targeting a group of angry youths" comes against a backdrop of "systematic terrorism, escalation aggression, ongoing siege, daily incursions in the al-Aqsa Mosque, agression against prisoners and settlement expansion. It is an aggression that comes in the context of the declared war on our people."

A little over a week ago four other Palestinian youths, aged 21,19, 20 and 21 also tried to infilitrate through the bordre fence.

While PIJ was sounding off against Israel, on the other side of the fence, the mayor of Sderot on Sunday was telling Israeli media the government should give the green light for a full-blown military operation in Gaza.

"We need to go on a wide-scale operation right now to eradicate Hamas, without waiting for other timings," Alon Davidi told Israel's Galei Tzahal Army Radio. "Only force can stop them."

He told Channel 13 there is no other choice but a ground operation in the Gaza Strip after the last week, saying "we have gone through an unpleasant weekend with red alerts for two days in a row. Sderot residents are on the one hand trying to keep to their normal routines, but on the other hand there is no choice in the current situation but to go on a ground operation in the Gaza Strip."

Another Paletsinian was killed on Friday after his car left the road and hit two Israelis standing at a bus stop. An off-duty police officer said the car had overturned and when he saw the driver driving to exit the vehicle he shot and killed him, according to The Jerusalem Post. It is unclear how the officer evaluated the intent of the driver.

The Israeli army too was quick to finger the Palestinian. "A Palestinian just rammed his car into Israeli civilians standing at a bus stop next to the community of Elazar, south of Jerusalem, injuring 2 Israeli civilians," the army posted on its Facebook page.

In the past 24 hours Israel has been hit by 3 rockets from the Gaza Strip, two of which, the army says, were intercepted by its Iron Dome.

The Israeli government policy is that irrespective of who fires rockets, or engages in any 'terrorist' activity, Hamas will be held responsbile as it rules the Gaza Strip.

305 Palestinians have been killed in Gaza and in border clashes since March last year, the majority on Fridays udring protests after prayers in what has become known as The Great March of Return. Seven Israelis have also died as a result of Gaza-related violence.