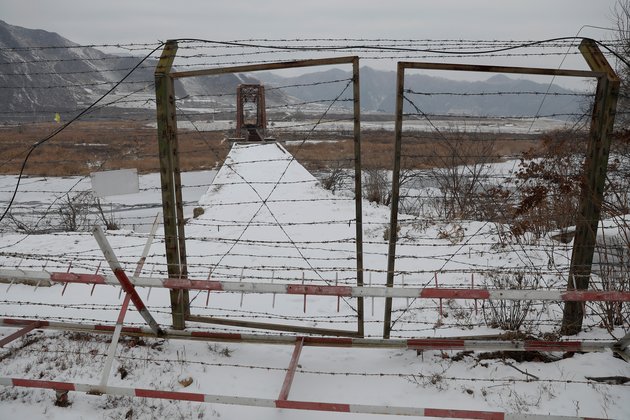 WASHINGTON - North Korea is unlikely to give up its nuclear weapons even if sanctions are eased, according to experts who think increasing pressure and enforcing sanctions will lead Pyongyang to relent on its nuclear program.

"I do not believe North Korea would give up its nuclear weapons if sanctions are lifted," said Joseph Bosco, an East Asia expert at the Institute for Corean-American Studies (ICAS). "Instead, they would increase their demands."

Joshua Stanton, a Washington-based attorney who helped draft the North Korea Sanctions Enforcement and Policy Enforcement Act in 2016, said, "If there is any chance of denuclearizing North Korea, it is to put so much pressure on Kim Jong Un that he or the generals around him decide that denuclearization is their only alternative to the collapse of the state."

As talks on denuclearization between Washington and Pyongyang remain stalled, the U.N. Security Council (UNSC) members are divided on whether sanctions imposed on North Korea should be relaxed.

Marc Pecsteen de Buytswerve, the Belgian ambassador to the U.N. who is currently serving as the president of the UNSC said Monday at a press conference that some Security Council members think sanctions on North Korea should be "a little bit eased."

At the same time, he said other members believe that sanctions "have to be maintained and really severely implemented in order to put pressure on North Korea to negotiate."

He did not name which member states support or oppose sanctions relief.

In December, Russia and China, both permanent members of the Security Council, proposed the UNSC lift sanctions on North Korea. The U.S. rejected the proposal at the time. In response to a question about their proposal, Buytswerve said, "There is no work being done about it," adding that "it stays where it is."

Sanctions were a key reason working-level talks between Washington and Pyongyang broke down in Stockholm in October. Discussions have remained deadlocked since then. Washington has been maintaining the position it took at the Hanoi summit in February 2019 on keeping sanctions on North Korea until it takes substantial steps toward denuclearization, while Pyongyang has been demanding that the U.S. change its stance.

North Korean leader Kim Jong Un apparently gave up on that demand as he said in January the country will now focus on building its economy through self-reliance without expecting sanctions to be lifted.

Experts think relaxing sanctions at this point would do more harm than good because Pyongyang has not made new offers to move toward denuclearization.

"In the absence of steps by North Korea on its nuclear program, easing sanctions unilaterally could send the wrong signal to Pyongyang - that if it continues to hold out, the international community will loosen sanctions further," said Troy Stangarone, senior director of the Korea Economic Institute.

Bruce Klingner, former CIA deputy division chief for Korea and current senior research fellow at the Heritage Foundation said, "To ease sanctions without positive North Korean action would be to provide the regime with unique immunity for violating U.N. resolutions."

If sanctions are eased, Bosco thinks North Korea would pressure the U.S. for additional concessions such as a formal end to the Korean War, recognition of its status as a nuclear state, and increased aid to compensate for losses caused by sanctions.

"They will conclude, as communist regimes always do, that Western concessions indicate weakness, and they become more adventurist and aggressive to extract more concessions," Bosco said.

Also, if sanctions were lifted, experts said re-imposing them would be difficult if North Korea refused to return to the negotiations.

"A better approach would be an agreement not to increase sanctions if North Korea refrained from further tests and engage in substantive talks," Stangarone said.

William Brown, former U.S. intelligence official who heads the Northeast Asia Economics and Intelligence Advisory, said "It would be hard to put tough sanctions, like we have now, back in place without some other larger North Korean provocations."

An argument for relief

Ken Gause, director for the Adversary Analytics Program at CNA, thinks sanctions relief could get North Korea to freeze its nuclear weapons program and does not see the U.S.-led pressure campaign leading to denuclearization.

"I don't see any way forward with a pressure-only campaign to bring about the intended goal of the UNSC of curbing North Korea's nuclear program," Gause said. "In an ironic way, it might actually accelerate the program."

Gause added that without China and Russia enforcing sanctions, it would be difficult to bring about a change in North Korea's position on nuclear weapons.

China in particular has been helping Pyongyang evade sanctions that restrict fuel export to North Korea and prohibit coal imports from the country.

Despite sanctions, Chinese merchants have been smuggling goods such as automobile and machinery parts across the border.

Klingner sees that illicit smuggling will likely be reduced because of North Korea's response to the coronavirus scare.

"This will, indirectly, increase enforcement of required sanctions and put greater pressure on the regime," Klingner said. "Reduction in smuggled fuel and other imports will impact the North Korean economy."

North Korea has temporarily closed the border it shares with China and banned all train and air links to and from China in an effort to keep the coronavirus at bay. [[ ]] Pyongyang also imposed strict quarantine measures on foreigners entering and exiting the country, and set up medical checkpoints in the provinces that border China.

Stangarone said China is an important source of food and intermediary goods for North Korea, and if North Korea is unable to import them from China for a prolonged time because the border is closed, its economy could be disrupted.

Brown said if the epidemic continues, North Korean workers remaining in China, who were supposed to return home by Dec. 22, 2019, deadline, may end up staying there.

"This may actually protect workers still in China for a short while," Brown said. "But it may, in the end, make it harder for already returned workers to go back. So the net impact is likely to further push the North Korean and Chinese economies apart."

Oh Taek-song and Han Sang-mi contributed to this report, which originated in VOA's Korean Service.