As US Reels From Capitol Violence, Russia Enjoys the Show 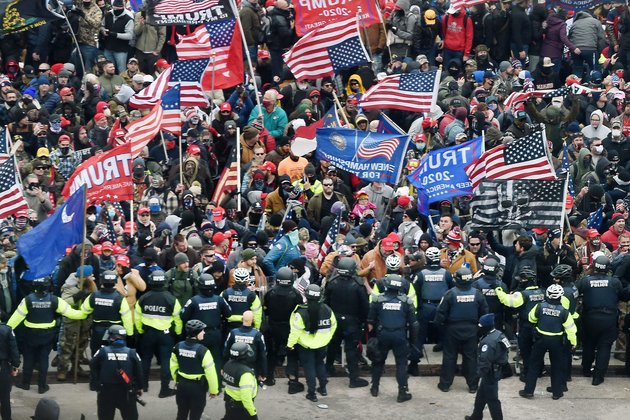 MOSCOW - While governments around the world have expressed outrage and sadness over rioting that engulfed the U.S. Capitol Wednesday, Russia took a different view -- namely, vindication with a bit of gloating.

"The celebration of democracy is over," Konstantin Kosachev, head of the foreign affairs committee in Russia's Federation Council, said in a Facebook post in which he argued - not for the first time - against placing America as the model among global democracies.

"America no longer forges that path, and consequently has lost its right to define it. Much less force it on others," he said.

Kosachev argued that the divisions in U.S. society were so deep that neither Republicans nor Democrats would accept the results of unsuccessful election bids going forward.

Russia's foreign ministry also focused on Thursday on the split in the U.S. electorate, while bristling again over past U.S. criticism of Russia's own elections.

"It's an internal issue for the USA," said Ministry of Foreign Affairs spokeswoman Maria Zakharova in comments to journalists.

"But again, we would point out that the electoral system in the U.S. is archaic and doesn't meet modern democratic standards, creates the possibility for various violations, and the American media has become an instrument of political infighting."

In its coverage, Russian state media promoted assertions by President Donald Trump, which have been repeatedly discredited, of election-rigging by thousands of alleged "dead soul" voters through mail-in voting.

The Russian press has also generally supported Trump's claims of a "deep state conspiracy" aimed at thwarting his efforts to improve relations with Moscow following allegations of Russian interference in the 2016 U.S. presidential elections.

Still, commentators greeted the latest events in Washington with "what about" -style comparisons drawn from the U.S. response to democratic uprisings in neighboring former Soviet republics like Belarus and Ukraine, where, the Kremlin argues, the U.S. has sought to overthrow Moscow-friendly governments by cheering on protesters.

"Most of all, [what] amazes [is] the awful out-of-control hypocrisy," Sergei Markov, a former lawmaker and Kremlin loyalist said on Facebook.

"The same politicians, experts, and media who only recently justified the seizure of government buildings in Ukraine, Belarus, and the street riots against Trump by supporters of Black Lives Matter and Antifa, now are categorically condemning the storming of the Congress," he said.

Markov made no mention of newly-passed laws in Russia that have restricted freedom of assembly.

"The Putinistas celebrate the conflict in the USA and exalt 'Putin's stability.' And they have problems, lots of them," Navalny posted on Twitter. "The only thing is that the USA still has an average monthly wage [of] 306,000 rubles. And in the Russian Federation it's 40,000, and in reality, even 30,000."

More liberal Russian voices also imagined if events similar to this week's political drama in Washington had played out in Moscow.

To imagine the Kremlin backing down to parliament and the courts "would be a Christmas fairy tale," liberal politician Dmitry Gudkov said on Facebook. "We have no alternate centers of power."

"The system of checks and balances in the U.S. has held," Russian journalist Alexei Venediktov said in a Twitter post after President-elect Joe Biden's victory was formalized by Congress early Thursday.

The events in Washington happened on Russia's Orthodox Christmas holiday, prompting suggestions at home and in the U.S. that the chaos was an unexpected gift to Russian President Vladimir Putin.

A popular meme showed the Russian leader's smiling face superimposed onto that of a demonstrator carrying off a lectern from the Capitol building.

But if Putin was pleased, he was not letting on. He made no mention of the riot during a brief statement for the Christmas holidays.

"This wonderful holiday illuminates the world with a light of love and kindness, gives joy and hope to millions of people and guides them towards timeless spiritual values," he said in a statement released by the Kremlin, wishing a Merry Christmas to all.