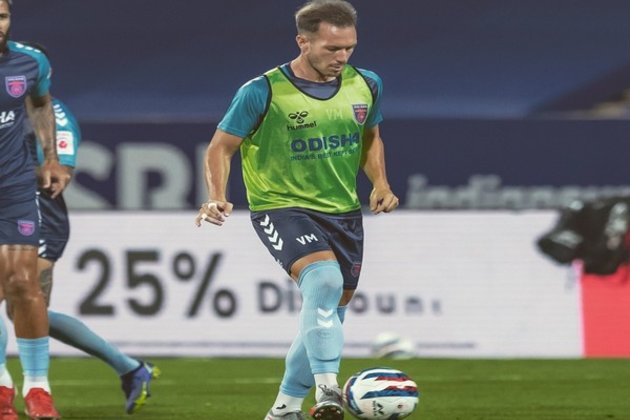 New Delhi [India], June 25 (ANI): Kerala Blasters FC announced the departure of defender Enes Sipovic from their squad ahead of the new season of the ISL. The club made the announcement through their social media handles on Friday.

The Bosnian international began his youth career at Bosnian club Zeljeznicar in Sarajevo and after spending one year here, he joined the Romanian club, SC Otelul Galati, in the 2008-09 season. The footballer won the 2010-11 Romanian top-division championship title with SC Otelul Galati.

After six productive seasons at Otelul Galati Sipovic, he moved to various clubs and enjoyed his stint at each club which includes KVC Westerlo (Belgium), Ittihad TangerRS Berkane (Morocco). Before moving to ISL, the defender played for Umm Salal in Qatar.

After spending a year with Chennaiyin FC in 2020-21, the full-back joined the Kochi-based team in ISL 2021-22. Sipovic featured in 14 matches for the Tuskers, he scored one goal and made 20 interceptions during this time.

The 31-years-old defender penned down a farewell comment on Instagram, "Thank you @keralablasters for an opportunity to represent all Malayali and all supporters of our beautiful team. My family is grateful for everything you have done for us, Imran was born as BLASTER and his parents will have an amazing story to tell him."Earlier in the day, defender Victor Mongil bid farewell to Odisha FC after spending one season with the Kalinga Warriors, the club confirmed.

The Spanish defender began his playing career with Valladolid, where he later appeared for both their senior team and B team in 2011-12. He played for a number of clubs in Spain before joining FC Dinamo Tbilisi in 2019, which included the Atletico Madrid B team. The Spaniard won the UEFA Europa League while playing for FC Dinamo Tbilisi. The defender additionally contributed to his team's Georgian Premier League triumph.

Before joining the Juggernauts, the 29-years-old full-back played for ATK FC in ISL 2019-20 season and he saw the heavyweights from Kolkata lifting the championship. In his one-year stint at the Odisha FC, he played 19 matches and made 70 clearances.

The Spaniard wrote down a goodbye message to his fans on his Instagram, "The time to say goodbye has come. I didn't think it was going to be this soon. I would like to thank all Odisha fan, because you have always transmitted me your love and support during all the season, you're the real Odisha spirit. I would like to thank my teammates too, the old staff, doctors, material staff, managers and every and each person that is part of the club,".

The full-back stated that he tried his best to stay at the club but he didn't get any word from the club regarding this, he further wrote down, "l also would like to make clear that I have tried to stay in all possible ways to stay being part of the club, but it's hard to continue ahead when you don't receive a call in all this time.""I'm leaving knowing I have given everything I have and more for this club. for this shield and for all Odisha fans. I'm leaving sad, but I will always support Odisha from the distance," he added. (ANI)