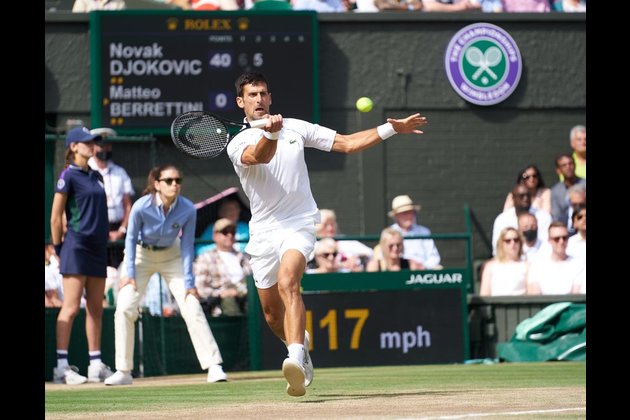 Rafael Nadal won the first two Grand Slam championships of 2022 at less than 100 percent, plagued by a chronic foot condition.

But after winning the French Open earlier this month, during which he had to undergo frequent injections to compete, he had a procedure aimed at reducing nerve pain.

And what he said at his news conference in advance of Wimbledon, which begins Monday, should leave his opponents in fear.

"I can walk normal most of the days, almost every single day. That's for me the main issue," Nadal, 36, said. "When I wake up, I don't have this pain that I was having for the last year and a half, so quite happy about that.

"And second thing, practicing. Since the last two weeks, I didn't have one day of these terrible days that I can't move at all. The feeling and overall feelings are positive."

Nadal is the No. 2 seed in the men's draw, trailing only No. 1 Novak Djokovic.

World No. 1 Daniil Medvedev is out of the tournament due to the All England Club's ban on players from Russia or Belarus this year, following the invasion of Ukraine. World No. 2 Alexander Zverev of Germany is recovering from surgery to repair an ankle injury he sustained against Nadal in the semifinals in Paris.

So that leaves Djokovic -- in an unfamiliar position at World No. 3 -- and his rival Nadal as at least the sentimental favorites in London, although some sportsbooks are favoring Djokovic, followed by Italian Matteo Berrettini. Nadal defeated the Serbian Djokovic in the quarterfinals at the French Open.

But clay is the domain of Nadal, and he was won 14 of his 22 career major titles on the surface in Paris, with just two of them coming at Wimbledon (2008 and 2010). And Djokovic has been dominant on the grass courts in London, where he is the three-time defending champion and hasn't lost since 2017.

He has won the tournament six times. A seventh win would tie him with Pete Sampras for second on the all-time list behind Roger Federer.

"I would like to be in the (final) to eventually make history," Djokovic at his pre-tournament press conference. "Pete Sampras winning his first Wimbledon was the first tennis match I ever saw on the TV. So of course, there is a lot of connection to this tournament. Pete has won it seven times ... Hopefully I can do the same this year."

Djokovic, 35, is tied with Federer with 20 Grand Slam titles. Federer has won in London eight times, the most by any man.

And while Federer won't be there as he recovers from knee surgeries, another legend will be: Serena Williams.

Williams hasn't played a competitive singles match since pulling out of Wimbledon with in the first round in 2021, tearing her right hamstring during the match. She has been stuck on 23 Grand Slam titles since winning the Australian Open in 2017, trailing Australian Margaret Court's 24 championships.

She has won the Australian seven times, the same as Wimbledon.

Williams, 40, has spent much of the past year on business ventures, but now that she is back in London, her focus is on tennis. She has practiced on Centre Court, where she sustained the injury last year in her match against Aliaksandra Sasnovich of Belarus.

"It was good for me to get that out of my system because the last moment I had on Centre Court was probably not my best moment," she said. "Wimbledon was tough last year. I felt like last year was tough ... I didn't retire. I just needed to heal physically, mentally."

Djokovic will be the first of the legends to take Centre Court this year. He will meet Soon-woo Kwon of North Korea Monday morning.

Nadal and Williams will play their first-round matches on Tuesday -- Nadal against Francisco Cerundolo of Argentina, with Williams pitted against Harmony Tan of France.

Williams' presence at Wimbledon has drawn the attention of the other women in the field, even World No. 1 Iga Swiatek, the most dominant female player in 2022. The French Open champion, Swiatek enters Wimbledon with a 44-3 record this year and a streak of 35 straight wins -- the longest streak since 2000, when Venus Williams won 35 in a row.

Despite those achievements, the 21-year-old Swiatek said she felt "overwhelmed" by Serena's presence.

"I didn't know how to react. I wanted to meet her," said Swiatek, who wasn't born when Serena made her Wimbledon debut in 1998. "I saw that she had so many people around her. I don't know her team. It was pretty weird.

"But just seeing her around is great because she's such a legend. There's nobody that has done so much in tennis."