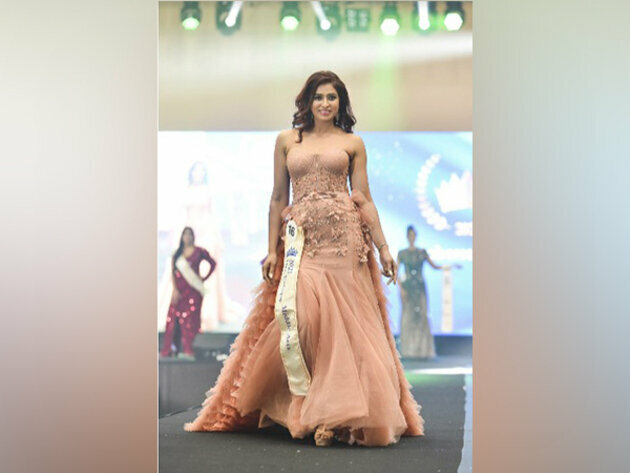 New Delhi [India], August 10 (ANI/India PR Distribution): Indian females have been always been making a mark in Worldwide beauty pageants for a long. Beauty pageants not only celebrate women's empowerment, but they are also a great platform for cross-cultural exchange. Mrs Univrse Joy in one such popular pageant. Mrs Universe Joy was organised in Seoul, South Korea.

Amrita Tripathi has made India proud by winning the coveted title of Mrs Universe Joy. Amrita left an indelible impression during the contest with her natural charm and dignified presence. Talking about her win, Amrita says, "I feel humbled to be bestowed upon with the title of Mrs Universe Joy. The title has certain positive energy associated with it and that makes me even happier. Maa Durga is my inspiration and I constantly had her in my thoughts during the competition. With this title, I also feel I have been given a big responsibility to carry upon my shoulders. I want to work diligently towards ensuring that more and more women get empowered and have the means to fulfil their dreams without any obstruction or fear."

Amrita is no stranger to beauty pageant competitions. In the year 2021, she won the title of Mrs India. One of her most cherished memories during the South Korea trip is visiting the War Memorial with the other contestants. "At the Memorial, I got teary-eyed to see the Indian flag and all the tributes that had been given to those 670 Indian doctors who were sent to South Korea to treat wounded soldiers during the war that had broken out in the year 1950.", she says.

In the National Costume Round, Amrita was seen wearing a gorgeous white-coloured dress that symbolized harmony, world peace and women empowerment. Her costume beautifully resembled the structure of a bird. On the wings of this intricately designed costume, one could see the lines "Give me wings, let me fly.....Believe in me, let me touch the sky" written. Amrita's costume served as an expression of her thoughts and how she wished to use a global platform to spread an important message.

Among other things, Amrita has been lauded for the way she represented India on a global platform. She started her journey in the Mrs Universe Contest by wearing an intricately designed Saree from local weavers in Bhopal Kaarigari and Piharwa. During one of the rounds, she wore a traditional jacket with the image of a peacock on it, this beautiful dress which had a national emblem on it was created by none other than Mrs Sayali by Kaarigari. At every step during the competition, she made a conscious effort to bring the glory of Madhya Pradesh and India to the centre stage.

Elaborating further on her memorable journey during the contest, she says, "I had not imagined my Mrs Universe journey to be so beautiful. I got to learn a lot of things and experienced significant growth in me as a person. A bunch of incredible women, from different parts of the world, had come to South Korea to participate in the pageant. By talking to and spending time with each other, we learnt about the cultures and traditions of our countries. I told everyone how girls and women are treated as Devis or Goddesses in India. I invited each of them to come to India and experience its beauty and divinity. I got a standing ovation during one of the rounds when I shared this. That shall remain my most special memory from the contest."

In the near future, Amrita plans to carry out initiatives to help several women in the country who have dreams in their eyes but haven't found the right path to follow. She has been working actively on several social issues and hopes to tour across the country to listen to the issues faced by women on a ground level.