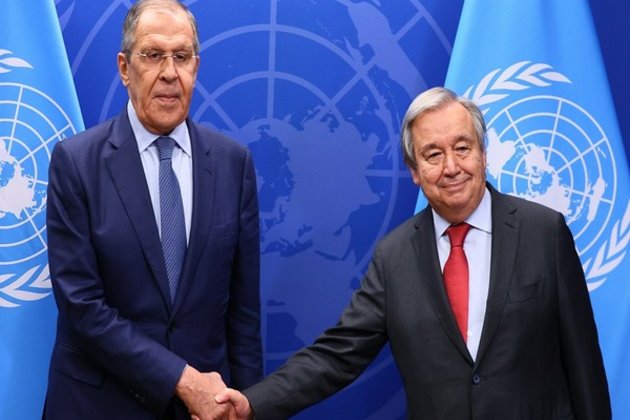 In a Tweet, Lavrov wrote, "On September 22, 2022, FM Lavrov had a meeting with UN SG Antonio Guterres in New York. Among the issues discussed was the implementation of the Istanbul agreements on exporting Ukrainian food produce from Black Sea ports."The officials focused on current international and regional issues, as per the Russian Ministry of Foreign Affairs.

They discussed in detail an unhindered export of Russian agricultural products and fertiliser. The parties confirmed the need to ensure that the agreements are treated as a package and are implemented in full.

Lavrov and Guterres reviewed a wide range of issues related to Russia's collaboration with the UN and some concrete initiatives intended to boost the UN and its Secretariat's effectiveness. They also confirmed their shared commitment to preserving the central coordinating role of the United Nations, whose activities must strictly abide by the goals and principles stated in the Charter, including the sovereign equality of all its member states.

Earlier on Thursday, Lavrov was criticized by the US and its allies for having left the United Nations Security Council meeting immediately as he finished his speech in which he accused Ukrainian forces of making "illegal" attacks on the "peaceful citizens of Donbas."A US official came down heavily on Russian Foreign Minister Sergey Lavrov for only being at the United Nations Security Council meeting on Ukraine for a short time and skipping the Russian criticism from Western diplomats, CNN reported.

Blinken criticized Russia for its war in Ukraine on Thursday and noted that countries including those maintaining "close ties" with Moscow have publicly condemned the conflict.

While Blinken was speaking, Lavrov skipped the session. Looking at such a scene, a US official criticised Lavrov and said, "Lavrov apparently couldn't bear to hear the clear and repeated messages of condemnation of Russia's war against Ukraine. He walked into the chamber just before his speaking slot and left shortly after."The official said it was a sign of Russian weakness and a testament to the fact that Russians recognize that they are being isolated on the world stage. It is pertinent to mention that the Russian Foreign Minister walked into the UN Security Council meeting at approximately 11:30 am ET and took his seat at the table, nearly 1.5 hours late.

The council was discussing the maintenance of peace and security in Ukraine. Earlier, at UNSC, Lavrov called Ukraine a "totalitarian Nazi-like state", and alleged that country's armed forces are using civilians as human shields.

He also accused Ukrainian President Volodymyr Zelensky and the "Kyiv regime" of "racist" and "anti-Russian" motivated aggression. "Ukraine has become a totalitarian Nazi-like state where the norms of humanitarian law are trampled on. There is no surprise that their armed forces in the national battalions are using peaceful civilians as human shields: Russian FM Sergey Lavrov at UNSC on Ukraine," Lavrov said in the UNSC briefing on Ukraine.

This comes as Ukrainian President Volodymyr Zelenskyy demanded punishment for Russia for the war in Ukraine, which has left thousands of people killed, displaced millions and reduced towns to rubble. (ANI)