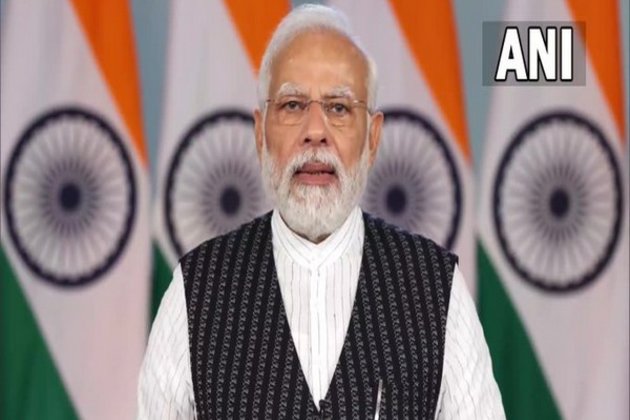 New Delhi [India], September 23 (ANI): Prime Minister Narendra Modi on Friday said that the construction of the Sardar Sarovar Dam in Gujarat was stalled for years by "urban Naxals" and "anti-development elements" and noted that the standard of living of citizens cannot be improved without the creation of modern infrastructure.

The Prime Minister, who inaugurated the National Conference of Environment Ministers in Ekta Nagar, Gujarat, via video conferencing, said the effort should be that no needless objections are created in the name of the environment in the path of ease of living and ease of doing business.

He pointed out that it took decades to complete the construction of the Sardar Sarovar Dam due to the "conspiracies" carried out in the name of the environment. The Prime Minister identified the role of urban Naxals in "hindering the development" of India by taking crores of rupees from different global organizations and foundations.

The Prime Minister said that Sardar Sarovar Dam was initiated by India's first Prime Minister Jawaharlal Nehru but urban Naxals came to the fore and some others outside the country joined them, there was a lot of campaign that it is against the environment and it was stopped repeatedly.

"The work that was initiated by Nehruji was completed during my tenure. How much money of the country was wasted? Today the same Ekta Nagar is an environment pilgrimage place. How many lies were spread? And these urban Naxals are not quiet today, they are playing their games today. Their lies have been caught but they are not willing to accept and they now get political patronage of some people," the Prime Minister said.

The Prime Minister also pointed out the conspiracies of such people due to which the World Bank had refused to give a loan to increase the height of the dam. "It took some time to thwart these conspiracies, but the people of Gujarat came out victorious. The dam was being described as a threat to the environment, and today the same dam has become synonymous with protecting the environment," the Prime Minister added. He also urged everyone to stay alert from such groups of urban Naxals in their respective states.

"To impede India's progress, some global institutions, some foundations catch such favourite topics and create a storm and these urban Naxals take up them and roadblocks are created," he said.

The Prime Minister reiterated that more than 6000 proposals for environmental clearance and 6500 applications for forest clearance are lying with the states. "Efforts should be made by the states to clear every proper proposal soon. You can guess that due to this pendency, projects worth thousands of crores of rupees will be stuck.", he added.

The Prime Minister also emphasised the need to bring about a change in the work environment so that the pendency goes down and clearance is expedited. The Prime Minister further added that in giving environmental clearance, "we also take care of the rules and give priority to the development of the people of that area".

"It is a win-win situation for both the economy and ecology. It should be our endeavour that by raising the name of the environment unnecessarily, no obstacle should be allowed to be created in the quest of Ease of Living and Ease of Doing Business. We have to remember that the faster the environment clearance is available, the faster the development will also take place."The Prime Minister highlighted that the conference is being held when India is setting new goals for the next 25 years.

Talking about the significance, the Prime Minister said that the holistic development of Ekta Nagar is a prime example of an environmental pilgrimage when it comes to forests, water conservation, tourism and our tribal brothers and sisters.

Giving examples of the International Solar Alliance, Coalition for Disaster Resilient Infrastructure, and LiFE movement, the Prime Minister remarked that India is not just taking huge strides in the field of renewable energy, but also guiding other nations of the world.

"Today's new India is moving ahead with new thinking, new approach," he said.

He said India is a rapidly developing economy, and it is continuously strengthening its ecology as well. "Our forest cover has increased and wetlands are also expanding rapidly", he said.

The Prime Minister remarked that the world is joining India because of its track record of fulfilling its commitments.

"Lions, tigers, elephants, one-horned rhinos and leopards have increased in numbers over the years. New excitement has returned from the homecoming of Cheetah in Madhya Pradesh a few days ago," he said.

Drawing attention to the net zero target for the year 2070, the Prime Minister said that the focus of the country is on green growth and green jobs.

He stressed the need to maintain equilibrium with nature and highlighted the role of the environment ministries of the states in achieving these goals.

"I urge all environment ministers to promote a circular economy as much as possible in the states," he said and added that it will significantly strengthen the solid waste management campaign and will free the country from the clutches of single-use plastic.

Referring to the role of the environment ministries, the Prime Minister said that this role should not be seen in a restricted manner.

"I think that the role of the Environment Ministry is more as a promoter of the environment rather than as a regulator."He asked the states to own the measures like vehicle scrapping policy, and biofuel measures like ethanol blending and strengthen them on the ground.

Throwing light on the groundwater issues, the Prime Minister said that the states with abundant water are also facing water shortages nowadays.

The Prime Minister remarked that the challenges and measures like chemical-free natural farming, Amrit Sarovar and water security, are not limited to the individual departments and the environment department will also have to consider these as an equally pressing challenge.

"As you all are well aware that in the National Education Policy that has been implemented in the country, a lot of emphasis has been laid on experienced-based learning," PM Modi said.

"Children who live in our coastal areas should also be taught how to protect the marine ecosystem. We have to make our children, and future generations sensitive toward the environment", the Prime Minister added.

The universities and laboratories should give top priority to innovations related to environmental protection, following the mantra of Jai Anusandhan. The Prime Minister also underlined the need of adoption of technology in protecting the environment. "Study and research on the conditions of forests inthe forests are equally important," PM Modi said.

Focussing on the alarming rate of forest fires in the western world, the Prime Minister remarked that India's share in global emissions may be negligible due to wildfire, "but we have to stay alert at all times".

The Prime Minister emphasised that the forest fire-fighting mechanism in every state should be technology driven and robust.

The Prime Minister gave the example of the Pragati Maidan Tunnel in Delhi that was dedicated to the nation a few weeks ago towards environment protection. "Due to this tunnel, the trouble of the people of Delhi getting stuck in the jam has reduced. Pragati Maidan Tunnel will also help in saving more than 55 lakh litres of fuel every year", he added.

He said this will reduce carbon emissions by about 13,000 tonnes every year which is equivalent to more than 6 lakh trees, according to experts.

"Be it flyovers, roads, expressways, or railway projects, their construction helps in reducing carbon emissions equally. At the time of clearance, we should not ignore this angle," PM Modi said.

The Prime Minister emphasised the use of the Parivesh Portal, a single-window mode for all types of clearances related to the environment while stressing its transparency and efficacy in reducing the rush for getting approvals.

"Where environment clearance used to take more than 600 days eight years ago, it takes 75 days today", the Prime Minister said.

He pointed out that the coordination in infrastructure projects has improved while many projects have gained momentum since the implementation of PM Gati Shakti National Master Plan.

He also stressed the need for disaster-resilient infrastructure and said "we have to make good use of every emerging sector of the economy while facing the challenges related to climate change".

"Both the central and the state government together have to move towards a green industrial economy", the Prime Minister added.

The Prime Minister said that the Ministry of Environment is not just a regulatory body but also a great medium for economic empowerment of the people and creating new means of employment.

"You will find a lot to learn, see and do in Ekta Nagar. Sardar Sarovar Dam, which gives Amrit to crores of people of Gujarat, is present here itself...Such a huge statue of Sardar Saheb inspires us to stick to the pledge of unity."Pointing out the learning opportunities in Kevadiya, Ekta Nagar, the Prime Minister remarked that solutions to issues like the simultaneous development of ecology and economy, strengthening of the environment and creation of new employment opportunities, bio-diversity being a medium to increase eco-tourism, and how the wealth of the forest goes up with the wealth of our tribal brothers and sisters can be addressed here.

Chief Minister of Gujarat Bhupendra Patel and Union Minister of Environment, Forest and Climate Change Bhupendra Yadav were among those present on the occasion. (ANI)