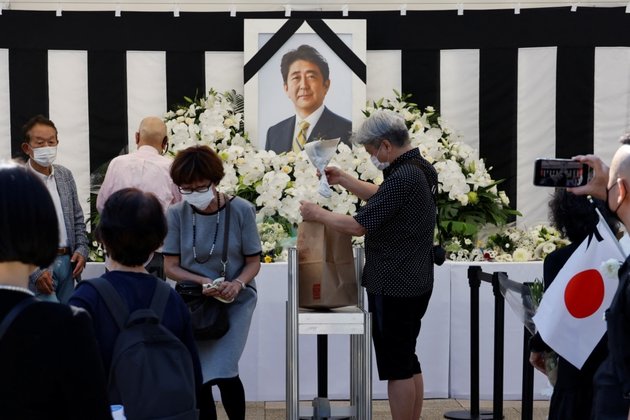 Tokyo - Japan will hold an elaborate state funeral Tuesday for former Prime Minister Shinzo Abe, one of modern Japan's most influential leaders, who was assassinated in July.

Hundreds of foreign dignitaries are expected to attend the ceremony at central Tokyo's Nippon Budokan arena, a reflection of Abe's broad popularity overseas.

Internationally, Abe won praise for his cooperation and friendship, especially with democratic countries, which he said should work together on common challenges.

The URL has been copied to your clipboard

U.S. Vice President Kamala Harris, who is leading the U.S. funeral delegation, said Monday that Abe had left a legacy of "enduring friendship with the United States."

Indian Prime Minister Narendra Modi, who is also attending the ceremony, said on Twitter that Abe was a "dear friend and a great champion of India-Japan friendship."

At home, the conservative Abe's legacy is more complicated. Since his death, his state funeral, an honor usually reserved for the emperor and his family, has drawn public backlash.

Polls suggest most Japanese oppose the state funeral. Many complain the event is too expensive. The government projects it will cost $12 million, much higher than an earlier estimate.

Thousands have attended recent rallies against the ceremony. Last week, a man set himself on fire near the prime minister's office, apparently in protest of the plans.

"I really admire his legacy, but I don't think there's a need to spend this much money to hold a huge state funeral," said Mrs. Sasaki, a Tokyo resident who provided only her surname.

"It doesn't matter whether he served a long time or not," said Mario Ito, walking outside the central Shibuya train station. "Seventy percent of Japanese people are opposed to doing this. The fact they're going ahead with it shows the government isn't working properly."

Abe led Japan at a complicated historical moment, with North Korea making significant advances in acquiring nuclear weapons and China emerging as a clearer threat to the U.S.-led global order.

Abe was adamant that Japan should become stronger to deal with those and other threats. He was a major proponent of amending the country's constitution, which was written by the United States following Japan's defeat in World War II. Abe also boosted Japan's defense spending, widened the role of its armed forces, and expanded his country's alliance with the United States.

But many of Abe's critics say he brought Japan closer to war - something unimaginable for a country with a technically pacifist defense architecture. They also opposed the way he often pushed ahead with his legislative priorities despite significant opposition.

"He had attributes that many of us find repellant, from his neutering of the adversarial press to his historical revisionism, but we can't really separate that from his successful institution-building to combat even greater threats to liberal norms and values," said Rob York, director for regional affairs at the Hawaii-based Pacific Forum.

"Had he not been working at that kind of coordination several years before Washington was on board, regional cooperation to secure a free and open Indo-Pacific would look far less developed than it is now," York added.

When Abe became prime minister for a second time in 2012, he brought relative stability, ending a six-year period where Japan averaged a new prime minister every year.

Although Abe's rule was long lasting, his popularity had declined by the time he left office, points out Jeffrey J. Hall, a Japanese politics expert at the Kanda University of International Studies.

"As a prime minister, he was successful in winning elections with his party again and again. But those elections had quite a low turnout. So even though he was winning, elections didn't mean that he was a very, very popular politician or loved by the people," Hall said.

Part of the current backlash against Abe has to do with the ruling party's ties to the controversial South Korea-based Unification Church. Abe's suspected killer said the group took excessive donations from his mother, leaving her impoverished. He accused Abe of supporting the church.

Abe's party, the ruling Liberal Democratic Party of Japan, earlier this month revealed that at least 179 of its lawmakers had connections to the Unification Church, which some of its former members see as a cult.

"You can't really separate this funeral and Abe's legacy from the Unification Church scandal, because as the party is revealed to have more and more ties to this church, most of these people were close associates of Abe, many of them within his own faction of the party," Hall said.

It has created a tricky situation for Japanese Prime Minister Fumio Kishida, an Abe protege. Amid the public backlash over the state funeral, Kishida's approval rating has sunk to new lows.

Kishida has defended his decision to hold the state funeral, saying it is an opportunity for Japan to have important discussions with other world leaders.

People go through a gate as they walk toward the building to be used for the state funeral of former Prime Minister Shinzo Abe as authorities have deployed extra officers to beef up securities in Tokyo, Sept. 26, 2022.

Japanese officials said Kishida will hold meetings with senior officials from about 30 countries this week, with some Japanese media dubbing the meetings "funeral diplomacy."

Asked about Japanese criticism of Abe's funeral, a senior U.S. official said he is "not going to comment on any internal Japanese attitudes."

"All I can say from our point of view is that Prime Minister Abe was a great friend of the United States," the U.S. official said. "He was a great leader for Japan."