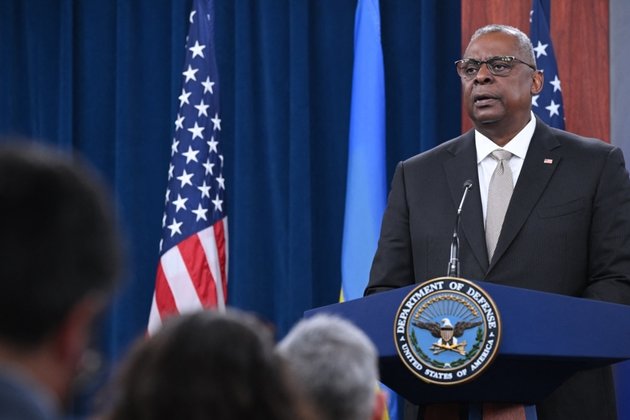 'Beijing, like Moscow, seeks a world where might makes right, where disputes are resolved by force, and where autocrats can stamp out the flame of freedom,' Austin told the Halifax International Security Forum in Canada.

Moscow's war against Kyiv 'has underscored the challenge that we face in the Indo-Pacific, where (China) is also pushing for something very far from our vision of a free and stable and open international system,' Austin said.

Chinese activities around Taiwan are growing 'increasingly provocative,' he said, with Beijing's aircraft flying close to the island on a near-daily basis and carrying out a number of dangerous intercepts of U.S. and allied planes.

Washington has identified China and its efforts to refashion the Indo-Pacific region as the most consequential challenge faced by the United States.

Austin linked the two challenges in his speech Saturday and said that if one country is able to get away with violations, others will follow.

'There are still rules in war. And if a big power can flaunt those rules, it encourages others to defy international law and international norms,' he said. 'We are determined to defend those rules - and especially the bedrock principle of noncombatant immunity.'

Austin also said Moscow's efforts to gain support from countries such as Iran and North Korea create new security challenges for the United States and its allies.

'Russia has turned to Iran and North Korea to help its assault on Ukraine, including using Iranian drones to kill Ukrainian civilians,' he said.

Washington has said Iranian personnel were in Crimea helping Russia carry out drone attacks on Ukraine, which Tehran has denied.

Austin said that Ukraine is facing a tough winter and that Moscow may again turn to nuclear saber-rattling as it suffers losses on the battlefield. He pledged that the U.S. and its allies would meet those challenges.

'Russia's invasion offers a preview of a possible world of tyranny and turmoil that none of us would want to live in,' he said.