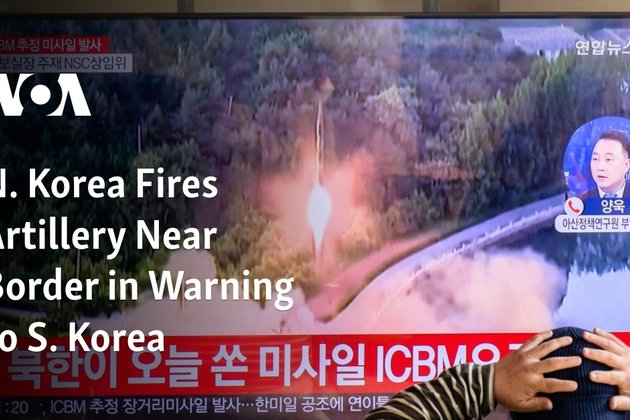 Seoul, South Korea - North Korea fired about 130 artillery rounds on Monday into the water near its western and eastern sea borders with South Korea, the latest military action contributing to worsening relations between the neighbors.

North Korea's military said the firings were a warning against ongoing South Korean artillery exercises near the inland border town of Cheorwon and blamed the South for worsening tensions.

South Korea's Joint Chiefs of Staff said the North Korean weapons, fired Monday afternoon from North Korea's western and eastern coastal areas, fell within the northern side of buffer zones created under a 2018 inter-Korean agreement to reduce military tensions. There were no immediate reports of shells falling inside South Korean territorial waters.

South Korea's military said it communicated a verbal warning to North Korea over the firings and urged it to abide by the agreement. The South Korean and U.S. militaries were closely monitoring North Korea's military activities while strengthening their readiness to respond to any 'potential contingency,' the Joint Chiefs of Staff said in a statement.

In a statement released through state media, an unidentified spokesperson of the North Korean People's Army's General Staff said North Korea instructed its western and eastern coastal units to fire artillery as a warning after it detected dozens of South Korean projectiles flying southeast from the Cheorwon region.

'We severely warn the enemy side to be prudent, not kindling the flame of escalation of tension unnecessary in the area around the front,' the spokesperson said.

It was the first time North Korea has fired weapons into the maritime buffer zones since Nov. 3, when around 80 artillery shells landed within North Korea's side of the zone off its eastern coast.

North Korea has fired dozens of missiles as it increased its weapons demonstrations to a record pace this year, including multiple tests of an intercontinental ballistic missile system potentially capable of reaching deep into the U.S. mainland, and an intermediate-range missile launched over Japan.

North Korea has also conducted a series of short-range launches it described as simulated nuclear attacks on South Korean and U.S. targets in an angry reaction to an expansion of joint U.S.-South Korea military exercises which North Korea views as rehearsals for a potential invasion.

Experts say North Korea hopes to negotiate economic and security concessions from a position of strength and force the United States to accept it as a nuclear power. South Korean officials have said North Korea might up the ante soon by conducting its first nuclear test since 2017.

North Korean state media said last week that leader Kim Jong Un has called for a major political conference before the end of the year at which he is expected to address increasingly tense relations with Washington and Seoul over the expansion of North Korea's nuclear and missile programs.

But the inter-Korean negotiations never recovered from the collapse of the second Kim-Trump meeting in February 2019, when the Americans rejected North Korean demands for a major easing of U.S.-led sanctions in exchange for a partial surrender of the North's nuclear capabilities.