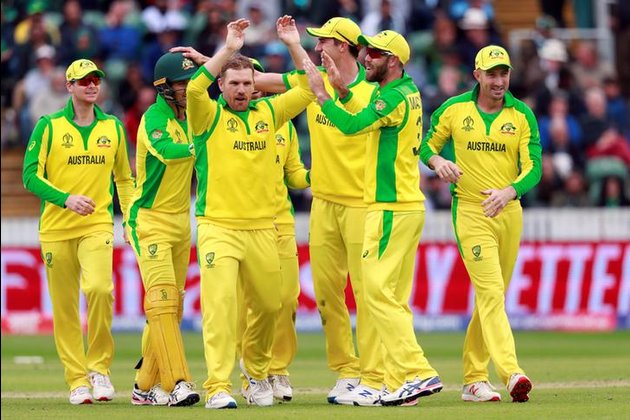 Chasing a target of 308 runs, Pakistan had a very sluggish start as Fakhar Zaman got out on a duck in the third over bowled by Pat Cummins. Imam-ul-Haq was then joined by Babar Azam and both struck regular boundaries to give their side a good momentum.

Both formed a partnership of 54 runs before Nathan Coulter-Nile got hold of Azam (30). Mohammad Hafeez then took the field and played steadily along with Imam-ul-Haq. Imam-ul-Haq (53) scored his half-century but soon after his half-century, he became a victim of Pat Cummins.

In the very next over, Mohammad Hafeez (46) tried to hit for a six off a full toss delivery bowled by Australia skipper Aaron Finch but gave away an easy catch to Mitchell Starc. Cummins came in to attack again after Finch's over and took the wicket of Shoaib Malik (0). With this, Pakistan had lost three wickets in three consecutive overs which had put them under immense pressure as half of their squad was back to the pavilion and they only had 149 runs on the board after the completion of 28 overs.

Sarfaraz Ahmed and Asif Ali then took the field but Asif Ali too got out after scoring just five runs. Asif Ali's dismissal brought Hasan Ali to the field and Hasan Ali started playing furiously from the beginning only. Hasan Ali scored 32 runs off just 15 deliveries which consisted of three sixes and three boundaries. However, Kane Richardson took the wicket of Hasan Ali in the 34th over.

Earlier, Australia got off to a scintillating start despite the first over of the inning was a maiden over bowled by Mohammad Amir. Both the openers, David Warner and Aaron Finch, batted brilliantly as they dominated the Pakistan bowlers.

Both struck their respective fifties and formed a 146-run partnership. Pakistan got their first breakthrough in the 23rd over as Finch tried to smash Amir but was caught by Mohammad Hafeez which ended his 82-run inning.

Steve Smith then joined Warner and both added another 43 runs on the scoreboard before Smith was sent back to the pavilion by Mohammad Hafeez in the 29th over.

Glenn Maxwell then took the field and scored 20 runs off just 10 balls but Shaheen Shah Afridi bowled him which brought Shaun Marsh to the field.

In the 36th over, Warner hammered a boundary to Shaheen Shah Afridi off his first delivery of the over and completed his century, which was his first since coming back from the ban.

Warner was dropped in the 37th over bowled by Wahab Riaz. However, in the very next over bowled by Shaheen Shah Afridi, Warner was caught at deep point by Imam-ul-Haq which brought an end to his 107-run inning.

Australia were at 243 runs for the loss of four wickets after the completion of 38 overs. After Warner's dismissal, Usman Khawaja took the field and along with Marsh, formed a 35-run partnership.

Cummins then accompanied Carey but he too got out in the very next over bowled by Hasan Ali. Mohammad Amir bowled the 49th over and took the wickets of Carey and Mitchell Starc and with this, all the Australian side was back to the pavilion after scoring 307 runs. After getting an impeccable start, Mohammad Amir hindered Australia's momentum as he achieved his career-best figures by taking five wickets and conceding just 30 runs in his 10 overs. Moreover, Amir is now the highest wicket-taker in the tournament with 10 wickets.

Australia will now face Sri Lanka on June 15 while Pakistan will compete with India on June 16.

HOUSTON, Texas - Over 60,000 people showed up for a Houston protest and rally in the wake of George Floyd's ...

LONDON, UK - Altaf Hussain, the founder and leader of the Muttahida Qaumi Movement (MQM), has appealed to the United ...

There is no need to wonder why George Floyd (age 46) was murdered in broad daylight in Minneapolis, Minnesota, on ...

With the U.S. deciding to walk out of the Open Skies agreement, the U.S. is signaling to the world that ...

SYDNEY, Australia - Wall Street took a breather on Thursday following more than a week of protests across the U.S., ...

PARIS, France, June 3 (Xinhua) -- France will maintain its planned tax on digital services at the Organization for Economic ...

SYDNEY, Australia - Stocks in Asia made strident gains on Wednesday, although on the Chinese mainland the advance was limited.The ...