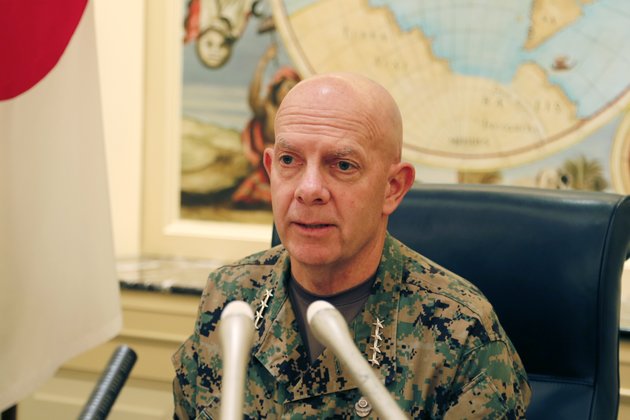 TOKYO - Gen. David Berger, the new U.S. Marines commandant, acknowledged Wednesday that he is concerned about deteriorating relations between Japan and South Korea, both key regional allies, but expressed hopes politicians would work out a resolution.

Berger stressed that Japan and Korea have common interests despite their differences, such as the threat posed by China and pursuing stability in Asia.

"I'm optimistic it will get worked out," said Berger, during his first trip to Japan after being appointed to his post.

Besides meetings with Japanese government and military officials, his visit also includes going to the southern islands of Okinawa, where most of the U.S. forces here are based. He heads to South Korea later this week.

Bilateral relations worsened after Tokyo removed South Korea's preferential trade status in early July. South Korea has decided to do the same to Japan, with the new rules taking effect in September.

Berger declined to comment on what might happen if South Korea makes good on the threat to end an agreement with Japan to share military intelligence, called the General Security of Military Information Agreement, or GSOMIA, which went into effect in 2016. He said such sharing was important from a military standpoint, and discussions were ongoing outside the military.

"I never said I was not concerned. We are. What I did say is we have a common focus on an assessment of what the near and long-term threats are. But absolutely we should all be concerned when any part of any alliance has some challenges," said Berger.

While in Okinawa, Berger will go to Henoko, where a U.S. Marine air base is being built on a coastal landfill. The Henoko base, decades in the making and backed by the Japanese government, would replace a base that's considered noisy and dangerous and is in a crowded residential area of Okinawa.

Many residents want the base moved completely off Okinawa, and its new governor, Denny Tamaki, was elected last year while pushing that demand.

Berger played down worries about delays and said construction was going smoothly, while stopping short of giving a detailed timeline.

He said he earlier checked out the construction of a Marines facility in U.S. Pacific territory of Guam, where some of the Marines from Japan will be transferred.

"I think the progress is solid,'' he said, adding that the overall plan to begin the moves in the early 2020s is "on track."

Japan sees the U.S. as its most important ally. Berger said the military of the two nations work closely together.

"This is the most consequential region for us. Our alliance with Japan is an essential part of that,'' he said.