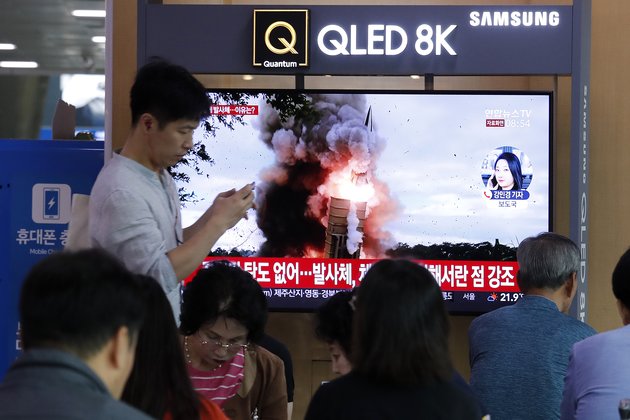 SEOUL - North Korea has fired two short-range projectiles - likely ballistic missiles - toward the sea off its east coast, South Korea and Japan reported Thursday, the 12th such launch by North Korea this year.

The launch comes as North Korea ramps up pressure ahead of its end-of-year deadline for the United States to change its approach to stalled nuclear talks. Earlier this week, North Korea warned the U.S. it would be "seriously mistaken" if it ignores the deadline.

The projectiles, which were launched from the Suncheon region of South Pyongan province, flew about 370 kilometers and reached an altitude of about 90 kilometers, South Korea's military said.

"North Korea's actions do not help ease tensions on the Korean peninsula, and we urge them to stop immediately," read a statement by the South Korean Joint Chiefs of Staff. South Korea's National Security Council expressed "strong concern" over the "short-range projectile" launch.Japanese officials say the projectiles were probably ballistic missiles, and that the weapons landed outside Japan's exclusive economic zone, which extends 370 kilometers off its coast.

North Korea has now launched 12 rounds of missiles since early May, after having refrained from such tests for a year and a half. The launches appear designed at least in part to boost Pyongyang's negotiating leverage.

North Korea earlier this month walked away from working-level negotiations with the United States in Stockholm, blaming the U.S. for failing to bring any new proposals. Pyongyang wants the U.S. to relax sanctions and other pressure.

Kim Yong Chol, a senior North Korean official, on Sunday warned the U.S. against using the Trump-Kim relationship as a delaying tactic, cautioning that Pyongyang was running out of patience with Washington.

Pyongyang has warned it could soon resume long-range missile or nuclear tests. Such a move could be a severe setback to nuclear negotiations.

Trump has said he has "no problem" with North Korea's short-range launches, since they cannot reach the United States.

However, North Korea seems intent on gradually testing more advanced weapons. In early October, it tested a medium-range ballistic missile designed to be launched from a submarine.

It's not yet clear what kind of weapon was involved in North Korea's latest test, says Vipin Narang, a nuclear and geopolitical expert at the Massachusetts Institute of Technology.

Narang says some of the preliminary data are similar to this year's tests of the KN-25, a solid-fueled, road-mobile, short-range ballistic missile that is fired from a multiple rocket-launch system.

"I'm just glad it's not worse -- like an SLV (satellite launch vehicle) or an ICBM (intercontinental ballistic missile)," Narang adds. "I suspect they will give us until the end of the year before they put that batter on deck."

The timing of the latest launch was unusual. Whereas most other tests this year have occurred in the early morning hours, Thursday's launch took place around dusk.

South Korea's Yonhap news agency on Wednesday reported the movement of North Korean transporter erector launchers, which are used to fire missiles. It isn't clear if that development was related to Thursday's launch.

North Korea has given varying justifications for its launches this year. Some of the launches, it says, were aimed at sending a warning to South Korea or the United States. Others were simply a test of its military capabilities and should not be seen as a provocation, it insisted.