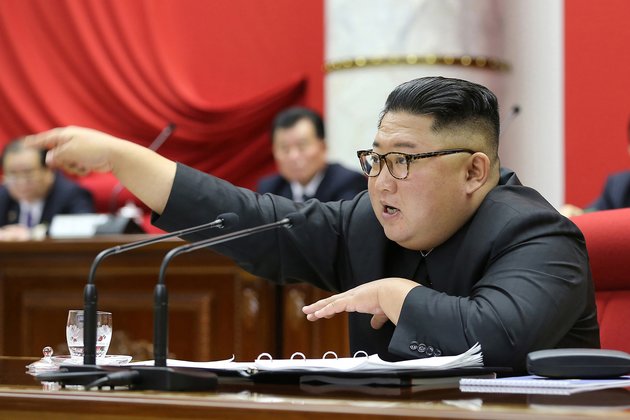 SEOUL - North Korean leader Kim Jong Un may not have formally abandoned nuclear talks in his New Year's comments published Wednesday. But Kim appears to be preparing his domestic audience for a long-term future without sanctions relief, effectively dismissing the possibility of progress in negotiations that have been stalled for months.

In his comments at the end of a four-day ruling party meeting, Kim unveiled a defiant new stance toward the U.S. and warned his country of possible hard times ahead. Because of the "long-term confrontation with the U.S.," Kim said, "it should be seen as a "fait accompli that we have to live under the sanctions by the hostile forces in the future."

"The DPRK-U.S. stand-off which has lasted century after century has now been compressed to (a) clear stand-off between self-reliance and sanctions," Kim said, using the acronym for North Korea's official name.

Kim also threatened to resume intercontinental ballistic missile or nuclear tests and warned the world would soon witness a "new strategic weapon" - comments that dominated most international media coverage of the speech.

But his domestic messages are also revealing, especially after Kim, who tries to project an almost godlike status in North Korea, returned home empty-handed following his February summit in Hanoi with U.S. President Donald Trump.

"I think the failure of Hanoi created some audience costs for him and those advocating for diplomacy with the U.S.," said Andray Abrahamian, a visiting scholar with George Mason University Korea. "They looked weak by asking for sanctions relief, now they're signaling that they don't need it."

In Hanoi, Kim offered to dismantle at least parts of his key Yongbyon nuclear complex in exchange for a relaxation of sanctions that have held back North Korea's economy. But Trump rejected the offer, a potential embarrassment for Kim, whose train ride home took more than two days.

North Korea has been under United Nations sanctions since 2006, and unilateral U.S. sanctions for even longer, as a result of its nuclear and missile programs. Trump has refused to relax sanctions until North Korea agrees to give up its entire nuclear weapons program.

Failure to secure sanctions relief is likely a major frustration for both North Korea's rising merchant class, which is being pinched by the economic restrictions, and for hard-line members of the country's traditional elite, many of whom oppose talks that may result in Pyongyang giving up its nuclear weapons.

Kim's speech may have been designed in part to convince those groups to stick with the regime - a call for continued loyalty, self-reliance, and determination in the face of hardship.

"Kim Jong Un's message about sanctions was a very 'learning to live with them' attitude," said Jenny Town, a Korea specialist at the Washington-based Stimson Center. "It is using this reality to justify economic and institutional changes."

One important possible change: a more stark turn toward North Korea's byungjin policy of simultaneously prioritizing nuclear and economic development. In effect, what it means is spending more money on defense.

Kim alluded to the possibility of 'belt-tightening,' a euphemism for sacrificing the civilian sector to build up national defense, which has been closely associated with byungjin, said Rachel Minyoung Lee, a Seoul-based analyst with NK News, a North Korea-focused website.

In 2012, Kim vowed North Koreans "will never have to tighten their belt again." A year later, Kim announced his byungjin policy. In 2018, Kim reversed track, declaring the country could focus on economic growth. Kim now may have signaled a de facto return to byungjin, said Lee, the NK News analyst.

"It is very important that we keep a close eye on how the state propaganda machine runs with 'belt-tightening' from here on out," she said.

It's not the only way in which North Koreans may be negatively impacted. Kim also called for a greater crackdown on "anti-socialist and non-socialist deeds," suggesting possible restrictions on private markets that have been allowed to emerge in recent decades. Kim also called for "tightening moral discipline throughout society."

At several points, Kim seemed to acknowledge that sanctions are hurting his country, but he insisted that "we cannot give up the security of our future just for the visible economic results and happiness and comfort."

"They're basically saying that nuclear weapons are integral to their economic success," said Duyeon Kim, a senior adviser for Northeast Asia and nuclear policy at the International Crisis Group. That amounts to a rejection of Washington's argument that scrapping nuclear weapons guarantees economic prosperity, she says.

North Korea will now try to become a "nuclear and economic powerhouse," she added. "It's telling that (Kim) stressed self-reliance as North Korea's primary duty and responsibility for achieving that goal, regardless of what happens outside its borders."

While Kim's speech did not completely reject nuclear negotiations, it did suggest a more hard-line stance in 2020, regardless of the impact on North Korea's economy.

"Kim asserts that North Korea's military strength is more than a match for 'external hostile policies' and that the country is on a path of economic development based on indigenous ideas and capabilities," says Leif-Eric Easley, associate professor of international studies at Ewha Womans University in Seoul.

"He wants the U.S. to negotiate with North Korea as if it were a full-fledged, responsible nuclear power."

NICE, France - A man wielding a knife on Thursday killed three people in an attack at the Basilica of ...

Golfing great comes out in support of Trump re-election

Snowden, hero to many, traitor to others, is awarded Russian residency

Chinese stocks gain for third day in row, most other Asian markets dip

SYDNEY, NSW, Australia - Asian investors on Thursday ignored the ructions overnight on Wall Street and around the globe, keeping ...

Britain and India shore up economic and financial ties

LONDON, UK - Britain and India entered into a range of agreements on Wednesday to solidify their relationship and promote ...

WASHINGTON, DC - There will be no new coronavirus economic relief package in the U.S. before next Tuesday's presidential and ...

OTTAWA, Canada - Five major aerospace companies in Canada and Boeing have inked an agreement which will see a multi-decade, ...

Won't You Be My Neighbor?