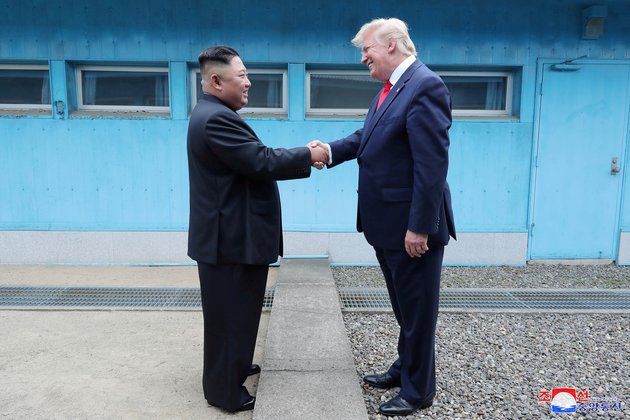 WASHINGTON - U.S. President Donald Trump is shifting his priorities away from North Korea in his run up to the presidential election this year, experts said, after fruitless efforts at denuclearization talks that remain deadlocked.

"I suspect the administration sees little opportunity for renewed nuclear diplomacy before the 2020 election," said Robert Manning, a senior fellow at the Atlantic Council.

Trump has been reassigning U.S. officials involved in negotiations with North Korea to other posts, a move that experts think signals that his administration is putting less emphasis on denuclearization talks that failed to make a breakthrough last year.

In December, Steve Biegun, who served as the State Department's special representative for North Korea since his appointment in August 2018, was confirmed as the Deputy Secretary of State. In January, Mark Lambert, who was the special envoy for North Korea, took up a role at the U.N. to contain Chinese influence at the international body. He began working at the State Department as director for Korea policy in 2015.

"The reassignments of officials who have worked on North Korea, combined with Trump's silence on the subject during his State of the Union address, suggest that no further engagement with Pyongyang is planned for the rest of this presidential term," said Joshua Pollack, a North Korean expert at the Middlebury Institute of International Studies in California.

In 2018, Trump spoke at length about North Korea. He highlighted the regime's violation of human rights records, with Ji Seong-ho, a North Korean defector, and the parents of Otto Warmbier, an American college student who died shortly after his release from being detained in North Korea, at the event.

In 2019, Trump praised his first summit with North Korean leader Kim Jong Un, described his relationship with him as "a good one," and announced that his administration was working on a second summit.

Trump met with Kim for the first time at the Singapore summit in June 2018. Their second summit was in February 2019 in Hanoi. It ended quickly because Washington's call for full denuclearization and Pyongyang's demand for sanctions relief did not mesh.

An attempt to bridge that difference at working-level talks in Stockholm in October broke down, and the talks remain stalled since then.

Manning said Trump is turning away from North Korea because the lack of progress made on denuclearization does little to benefit him during an election year.

"Trump has made North Korea a signature issue of his foreign policy, so the failure to achieve any serious steps toward denuclearization, while North Korea continues to improve its missile and nuclear capabilities is a stain on his record on a key issue in which he is heavily invested," Manning said.

According to a confidential U.N. report to be released next month and seen by Reuters, North Korea has been continuing to develop its nuclear and ballistic missile programs while it was engaged with the U.S. last year.

On Monday, CNN reported that Trump told his top foreign policy advisers he does not want to meet with Kim before the presidential election in November, quoting sources familiar with the matter.

Speaking at the Atlantic Council, a foreign policy think tank in Washington, on Tuesday, National Security Adviser Robert O'Brien said the president would meet with Kim if there is a prospect of making a deal.

"If there is an opportunity to move the ball forward for the American people, he's always willing to do that," O'Brien said. "We will have to see as to whether another summit between the leaders is appropriate."

Douglas Paal, vice president at the Carnegie Endowment for International Peace, said that attempting a summit with Kim could be risky for Trump, who is running for re-election. But O'Brien's remarks suggest that the Trump administration is leaving a door open for diplomacy.

"Doing deals with dictators in election years tends to benefit the opposition," Paal said. "Trump sees no need for a summit now, but his national security adviser is covering for the possible downside."

Scott Snyder, director of the U.S.-Korea policy program at the Council on Foreign Relations, said neither Trump nor Kim has much to gain if there is no progress made through another summit.

"It stands to reason that Trump would seek political benefit from another meeting [with] Kim, but would not be interested in another meeting if it will not benefit him politically or advance the U.S. national security interest," Snyder said.

"It is in the interest of both Trump and Kim Jong Un to ensure that any future meetings are accompanied by meaningful achievements," he added.

Experts think there is little chance that another summit will take place between Washington and Pyongyang this year in the current stalemate.

"There is little reason to think that the two leaders will meet this year or that any new agreements will be reached," Pollack said. "The sides simply aren't talking to each other."

However, North Korea could become a priority if it changes its position or tests more missiles, according to experts.

Ken Gause, director of the Adversary Analytics Program at CNA, thinks North Korea could either escalate threats by testing its weapons again in an attempt to gain the U.S. attention or stay conservative, hoping that Trump will win the election.

"That comes down to North Korean calculus," Gause said. "What does Kim think? Does Kim think that it's better to be conservative, not cause a lot of problems and hopes that Trump wins? Or does he think, 'Hey I need to force this issue before the election?' And, we'll find out in the next few months."

Lee Joen and Ahn So-young contributed to this report, which originated on VOA Korean.