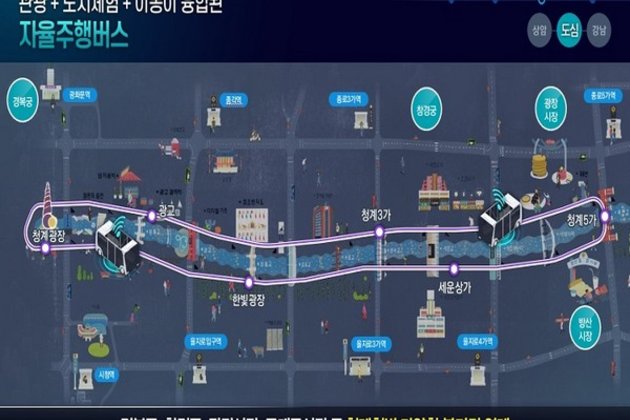 The Seoul government is planning to gradually increase commercial autonomous vehicle test areas such as Sangam, Gangnam, Yeouido, and Magok, and will operate self-driving buses in Cheonggyecheon from April next year. In addition, it will establish autonomous driving infrastructure on roads with two or more lanes in Seoul by 2026, and settle self-driving buses as public transportation.

Mayor Oh held a press conference on 'Seoul Self-driving Vision 2030' at the Seoul City Hall on the 24th and said, "Seoul will become a future city living with self-driving transportation in 2030." He also said he will make Seoul one of the top 5 self-driving cities by 2026. To this end, the Seoul government will invest a total of 148.7 billion won over the next 5 years from next year.

Seoul will gradually increase the number of autonomous vehicle test areas such as Sangam this year, Gangnam next year, Yeouido in 2023, and Magok in 2024, and present more than 300 self-driving vehicle services by 2026. These areas provide various commercial self-driving car services, which are available for citizens to pay fees, such as transportation service apps.

The government will operate more than ten 'Robotaxis (self-driving taxis) in Gangnam-gu as the test area next year. Then it will increase the number of self-driving buses and robotaxis to more than 100 units in 2026. As there is a high demand for short-distance transportation within 3km in Gangnam area, it is also considering replacing shuttle buses with self-driving electric vehicles.

The government is also planning to operate self-driving buses in Cheonggyecheon. The route is from Cheonggye Plaza to Cheonggye 5 Ga, and it will begin operation as early as April next year.

From 2023, self-driving buses will be operated from Hongdae to Sinchon, Jonggak, and Heunginjimun (9.7km), where demand for late-night transportation is high, by using central lane during late-night hours. Prior to passenger cars, the government is planning to apply autonomous driving technology to public transportation first. (ANI/Global Economic)