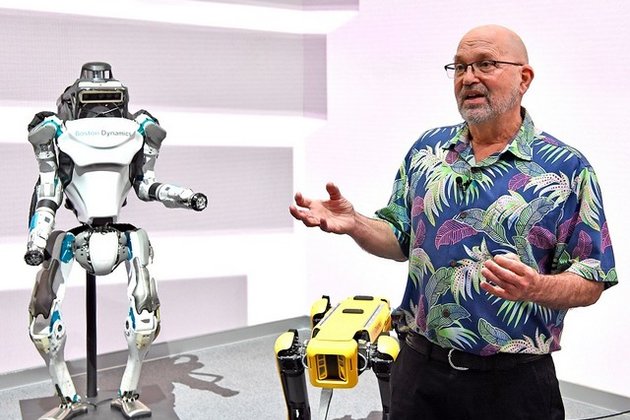 On this day, Boston Dynamics Chairman Raibert said, "We are carefully thinking about how to help people when developing robots."Spot, Stretch, and Atlas are the famous robots developed by Boston Dynamics. He introduced those robots as 'today, tomorrow, and the future.'The robot representing 'today (present)' is the 'Spot.' It was designed to handle various tasks. It can move alone, and also do the task with the other works.

'Stretch,' the robot representing 'tomorrow,' was designed to focus on a single task. This is useful for the logistics industry, such as transportation or inventory management. It is expected to be mass-produced next year.

The robot 'Atlas,' which is representing 'future,' is a human-type robot with two legs and two arms. It also has a vision scanner and visual sensor that play a role in the human brain. It was developed to be used on various platforms and can study innovative ideas.

Regarding the robot development of Tesla, Chairman Raibert said, "I have no idea about Tesla's robot development. However, if Tesla does well in robot business such as humanoids as well, it will be surprising."In particular, he said, "The competition deserves to be welcome. I wish for a world where customers ask "Which robot do we buy?" rather than "Can we buy a robot?"He also showed off a strong relationship between Boston Dynamics and Hyundai Motor.

Chairman Raibert said, "The two companies are participating in lots of collaboration works. Hyundai Motor is actively investing in RD for current and future business, and also has the mass-production capability."He added, "Hyundai Motor has also developed their capabilities in the robotics field. Hyundai Motor's top management, including Chairman Chung Eui-sun, is also paying attention to the robotics technology and actively supporting it."He also mentioned the possibility of further collaboration. He said, "Both Boston Dynamics and Hyundai Motor are actively discussing further collaboration. We may be able to announce a detailed plan next year or in two years. Communications with Chairman Chung and his supporters have also positively affected Boston Dynamics." (ANI/Global Economic)