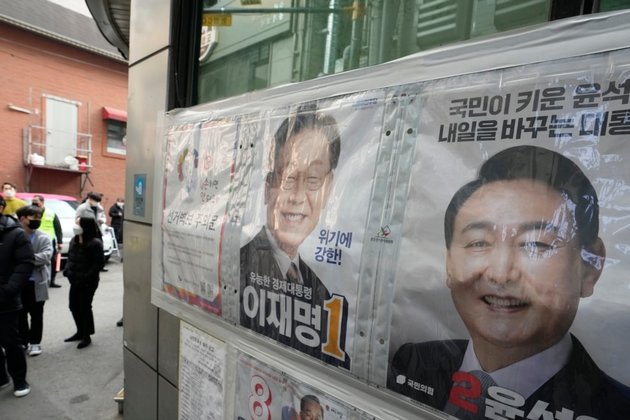 The liberal candidate, former provincial governor Lee Jae-myung, and his conservative rival, ex-prosecutor Yoon Seok-youl, are locked in a tight race ahead of the vote.

But debate over those issues has been overshadowed by ferocious mudslinging between the two candidates, which many observers say has reached unprecedented levels.

"Unlike in the past, when there was fighting over a cause or for an ideology, this campaign has focused more on personal attacks," says Kim Min-ha, a political commentator and author. "It is said this is the worst election ever."

Both candidates are extremely unpopular, opinion polls suggest, leading many media outlets to refer to the race as the "election of the unfavorables." But that may not hamper turnout, as evidenced by long lines at early voting stations.

"In this election, the prevailing logic among voters is to vote to prevent the other candidate from winning," says Kim, author of a book entitled, Democracy In Which People Vote Because They Hate Each Other.

South Korea has long seen fierce battles between conservatives and liberals. It can often feel like a zero-sum game; every living former president has been convicted of crimes, many after their political rivals took power.

But the stakes feel even higher now, especially for conservatives who are still reeling after their icon, ex-President Park Geun-hye, was impeached in 2017 and convicted on corruption charges. Park, the daughter of longtime military dictator Park Chung-hee, was pardoned late last year by her successor, outgoing President Moon Jae-in.

Yoon, the conservative, has threatened to launch investigations of Moon, as well his rival, Lee, if he becomes president. Yoon has also compared his rivals in the ruling party to Hitler and Mussolini.

Meanwhile, Lee, the liberal, faces questions of whether he knew about or was involved in a snowballing real estate corruption scandal during his time as mayor of a town on the outskirts of Seoul. Lee denies any wrongdoing, instead accusing Yoon of involvement in the scheme.

At a debate last year, Lee offered to pull down his pants after a rival brought up old allegations of an extramarital affair with a well-known actress who had described what she said was a distinctive mole on the candidate's genitals.

The candidates' families also haven't been spared. In a taped conversation released following a legal battle, Yoon's wife mused about jailing journalists who criticize her husband. She also apologized over a controversy in which she was accused of lying on a resume earlier in her career. Lee's wife also apologized last month after allegations she misused public resources during her husband's term as a provincial governor.

The drama has drowned out most debate about policy, to the disappointment of many voters.

"Young people have no jobs and are in a difficult situation," Lee Nam-hee, a Seoul businessman tells VOA. The next president should "think only of the people rather than be stuck in political arguing," he added.

On foreign policy, Lee vows to continue Moon's outreach to North Korea and promises a balanced approach to diplomacy that does not antagonize China, South Korea's biggest trading partner. Yoon advocates a policy of "peace through strength" with North Korea and is more vocally critical of Beijing.

No matter who wins, many analysts predict a large degree of continuity in Seoul's foreign policy.

"Economic self-interest, a rebarbative North and worsening U.S.-China tensions will set the parameters for whoever next occupies the Blue House," writes Aidan Foster-Carter, a Korea specialist at Leeds University. "The rhetoric may vary, but the wiggle room is small."

Kim, the Korean political pundit, agrees, saying even if Yoon wins, he will be restrained by the ruling party's supermajority in the National Assembly legislature

"There will be no significant difference," he says, "no matter what candidate becomes president."

Lee Juhyun and Kim Hyungjin contributed to the report.