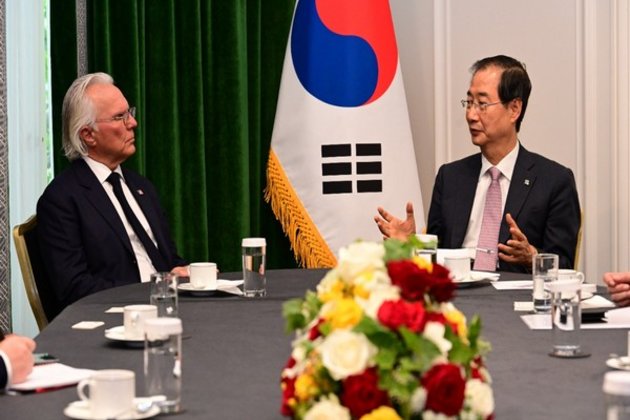 Prime Minister Han Duck-soo, who visited Paris to attend the BIE meeting as the chairman of the bidding committee for the 2030 Busan World Expo, met with the co-chair of the Minnesota Expo bidding committee Robert Clark at the Intercontinental Hotel on the 20th (local time.) The U.S. is pushing to hold the 2027 World Fair in Minnesota, and Korea is promoting hosting the 2030 Busan World Expo.

Prime Minister Han and co-chair Clark have agreed that South Korea and the U.S. are allies and will cooperate to hold the World Expo.

Prime Minister Han said, "South Korea and the U.S. have persuasive power in terms of sustainable development, climate change, inequality, and technology. In addition, Busan has a strong advantage in transshipment, and is becoming a high-tech and smart city.""Now we will show a turning point in global issues, climate change, environment, and inequality," he stressed. "South Korea is a best practice that shows any underdeveloped country can become a high-tech industrial country. We will fully support the underdeveloped countries to gain courage and strength."The meeting was held for about 30 minutes. The two sides also reportedly appreciated their ability to attract the world expo.

An official from the Prime Minister's Office said, "Prime Minister Han explained that Busan is a symbolic city that overcame the poverty and became a transportation and digital city. In addition, it has important values for Korean modern history, especially the Korean War."Co-chair Clark said, "I was impressed by the size of the Korean exhibition hall in Dubai Expo." He also accepted Prime Minister Han's request to visit Busan and evaluate the ability to host the expo, the official said. (ANI/Global Economic)

French urged to conserve energy use to prepare for winter

PARIS, France: Amidst shortages and soaring prices caused by Russia's invasion of Ukraine and subsequent supply cuts, the heads of ...

At this week's G7 meeting, imports of Russian gold to be banned

WASHINGTON D.C.: In the latest in a series of sanctions aimed at further isolating Russia economically over its invasion of ...

MAGWAY, Myanmar - At least eight resistance fighters were killed on Wednesday when junta troops intercepted a truck they were ...

SHANGHAI, China: As Shanghai reports no new cases of Covid for the first time in two months, Shanghai's top communist ...

WASHINGTON D.C.: The White House has reported that the U.S., Australia, Japan, New Zealand and the UK have created an ...

The Ballad of Buster Scruggs