What to Expect From South Korea's First NATO Summit 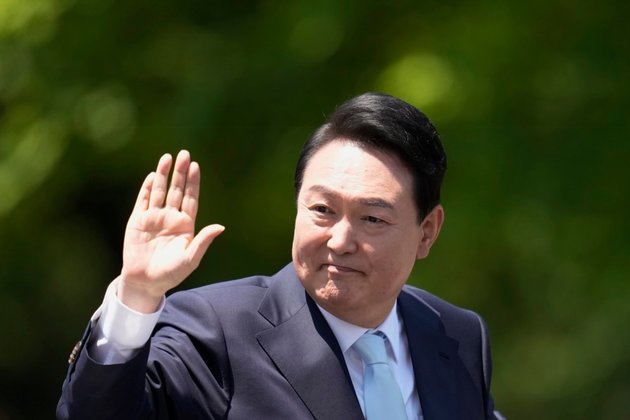 washington - South Korean President Yoon Suk Yeol will participate at the NATO summit in Madrid on Tuesday and Wednesday, reflecting what experts say is Seoul's expanded global role in dealing with threats from China, Russia and North Korea.

South Korea, a non-NATO member, was invited as a partner nation to attend the summit of the military alliance of 30 countries. Other Asia-Pacific countries invited are Australia, Japan and New Zealand.

Yoon is the first South Korean president to participate at the summit, and it is his first overseas trip since his inauguration in May.

Yoon said May 10 in his inauguration speech that his foreign policy goal is to make South Korea a 'global pivotal state' bolstering cooperation with like-minded countries to promote liberal democratic values of freedom, peace and prosperity.

Ellen Kim, deputy director of the Korea Chair at the Center for Strategic and International Studies, said Yoon's attendance will also 'send a message of alignment with NATO members and other non-NATO partners in strengthening the rules-based international order.'

Seoul will also establish a diplomatic mission to NATO at its Brussels headquarters. South Korea is the only one of the four Asia-Pacific partner nations invited to the summit that has not set up a mission.

Andrew Yeo, a senior fellow and the SK-Korea Foundation Chair in Korea Studies at Brookings, said, 'NATO's invitation to Indo-Pacific countries including (South) Korea indicates a realization of deeper linkage between trans-Atlantic and trans-Pacific security, in part because of greater China-Russia cooperation.'

Ahead of the NATO summit, China and Russia vowed closer cooperation along with other BRICS members Brazil, India, and South Africa at the summit of the emerging economies on June 22. Only Brazil criticized the Russian invasion of Ukraine at the U.N. General Assembly.

'As a liberal democracy that shares a broad range of values with NATO member states, (South) Korea has a stake in the ongoing effort by liberal democracies to strengthen their security cooperation to deal with common threats and concerns, including Russia and China,' Revere said.

At the summit, South Korea and other Asia-Pacific countries will discuss with NATO how they can cooperate on both hemispheres to enhance security, according to Yeo.

'NATO will seek support from Asian countries on the war in Ukraine, and likewise, they want to find ways to cooperate on policies in response to security concerns in the Indo-Pacific,' Yeo said.

South Korea's National Security Adviser Kim Sung-han said at a news briefing June 22 that Yoon will seek to establish a 'comprehensive security network' through the NATO summit 'amidst unpredictable global situations,' including Russia's invasion of Ukraine

Chinese Foreign Ministry Spokesperson Wang Wenbin said on June 23 that 'the Asia-Pacific is beyond the geographical scope' of NATO, which is 'flexing its muscles' trying to stir up 'confrontation.'

A spokesperson for Yoon said June 25 that Seoul's NATO summit participation cannot be viewed as 'anti-China or anti-Russian.'

Kim also said on June 22 that at the summit Yoon will discuss the issue of North Korea's nuclear weapons.

NATO and South Korea share a security interest in nuclear deterrence, said Markus Garlauskas, a nonresident senior fellow at the Atlantic Council who served as the national intelligence officer for North Korea on the National Intelligence Council at the Office of the Director of National Intelligence from 2014 to 2020.

Garlauskas said the use of nuclear weapons by Moscow could embolden Pyongyang to use them, setting off security alarms among NATO nations and South Korea alike, and discussions 'on the future of nuclear deterrence around the globe.'

Russia has alluded to the use of nuclear weapons several times since fighting began in Ukraine. On June 25, Moscow said it would deploy missiles capable of carrying nuclear weapons to Belarus, according to Reuters, in an apparent effort to counter Western countries' support for Ukraine and what Moscow sees as NATO's expansion.

North Korea has increasingly stressed its nuclear ambitions, adopting unspecified military measures 'to enhance the operational capabilities of the frontline units,' according to its state media on Friday. Experts believe those measures include nuclear weapons aimed at South Korea.

In April, Pyongyang said it could use nuclear weapons 'preemptively' against 'threatening moves.'

At a trilateral meeting among U.S. President Joe Biden, Japanese Prime Minister Kishida Fumio, and Yoon expected to be held on the sidelines of the NATO summit, North Korea's nuclear weapons and steps to bolster deterrence are likely subjects, according to Christopher Johnstone, Japan Chair at the Center for Strategic and International Studies who recently served as director for East Asia on Biden's National Security Council.

Johnstone said the trilateral meeting 'would send a strong signal about their intent to move beyond historical issues and improve the relationship.'

The trilateral meeting will be the first in nearly five years as Seoul-Tokyo's historical disputes stemming from Japanese occupation of the Korean Peninsula from 1910 to 1945 have been ongoing, often disrupting Washington's efforts to bolster cooperation between its two East Asian allies. Kishida is the first Japanese prime minister to participate at the summit.

Referring to Seoul and Tokyo NATO summit attendance as 'a game changer for NATO itself,' Shihoko Goto, deputy director for the Asia Program at the Wilson Center, said in addition to North Korea, there will be added expectations that the two 'contribute fully to ensure the stability of Indo-Pacific' and 'for greater alignment in dealing with Chinese incursion in the East China Sea in particular.'