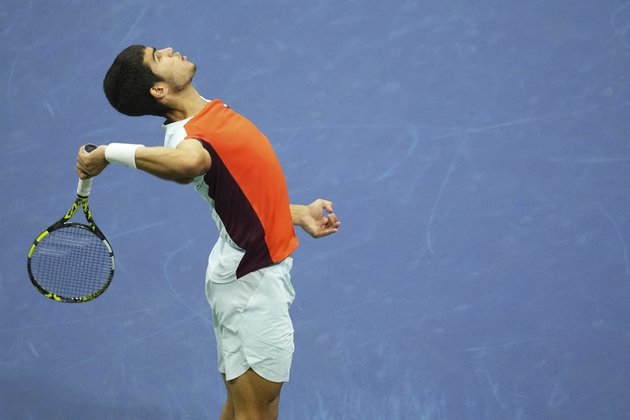 Spain defeated South Korea 3-0 in Valencia, Spain, on Sunday to win Group B and reach the quarterfinals of the Davis Cup.

Spain and Croatia were the final two teams to secure their spots in the knockout stage Sunday. Croatia (2-1) finished second in Group A when Italy (3-0) defeated Sweden (1-2) in Bologna, Italy, 2-1.

The Davis Cup group stage took place from Tuesday through Sunday in four cities across Europe. The top two teams in each round-robin group advanced to the knockout stage in Malaga, Spain, Nov. 22-27.

Roberto Bautista Agut got Spain started with a 6-1, 6-3 win over Seong-chan Hong. World No. 1 Carlos Alcaraz then guaranteed Spain's advancement with a 6-4, 7-6 (1) victory over Soonwoo Kwon, two days after he lost to Canadian Felix Auger-Aliassime.

The Spanish doubles team of Marcel Granollers and Pedro Martinez finished off the shutout by beating JiSung Nam and Min-Kyu Song 7-5, 3-6, 6-1.

Spain formed a three-way tie at 2-1 with Canada and Serbia and won the tiebreaker on total matches won (seven). Canada, which had already qualified for the knockout no matter Sunday's result, placed second and Serbia was left out.

Italy opened its match against Sweden with Matteo Berrettini's 6-4, 6-4 win over Elias Ymer. Mikael Ymer responded for the Swedes with a 6-4, 3-6, 6-3 victory over Jannik Sinner. In doubles, Simone Bolelli and Fabio Fognini took down Andre Goransson and Dragos Nicolae Madaras 7-6 (2), 6-2.

Germany defeated Australia 2-1 in Hamburg, Germany, to claim the top spot in Group C. Both nations entered the day 2-0 and already guaranteed a quarterfinal berth.

Jan-Lennard Struff of Germany bested Max Purcell 6-1, 7-5. Thanasi Kokkinakis came back for Australia with a 7-6 (6), 6-1 win over Oscar Otte. In doubles, Kevin Krawietz and Tim Puetz defeated Matthew Ebden and Purcell 6-4, 6-4 to help the Germans finish the group stage 3-0.

In Group D, Great Britain defeated Kazakhstan 2-1 in a match of already-eliminated teams in Glasgow, Scotland.

Andy Murray scored a 6-4, 6-3 win over Kazakhstan's Dmitry Popko. Alexander Bublik came back to beat Cameron Norrie by the same score. Joe Salisbury and Neal Skupski decided it in doubles for the Brits, with a 7-6 (2), 6-7 (9), 7-6 (4) marathon win over Bublik and Aleksandr Nedovyesov.

The Netherlands and the United States had already qualified for the quarters out of Group D.