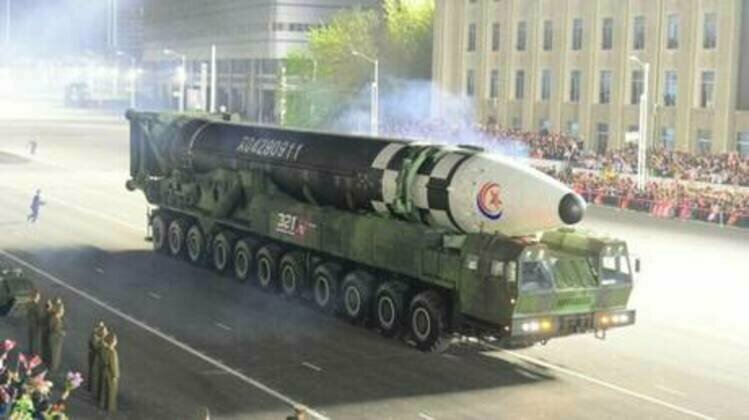 North Korea has fired an apparent intercontinental ballistic missile (ICBM) toward its East Sea, according to South Korean and Japanese officials, with Tokyo stating the projectile landed in waters within its exclusive economic zone.

The South Korean military's Joint Chiefs of Staff (JCS) reported a long-range ballistic missile launch early on Friday morning, saying it originated from the Sunan area near the North Korean capital around 10:15am local time.

"While strengthening our monitoring and vigilance, our military is maintaining a full readiness posture in close cooperation with the US," the JCS said in a message to reporters, sharing no other details about the launch, including the exact munition involved and how far it traveled.

Japanese Prime Minister Fumio Kishida was quick to condemn the apparent show of force, saying his country had "naturally lodged a strong protest against North Korea, which has repeated its provocations with unprecedented frequency."

"We have told [North Korea] that we absolutely cannot tolerate such actions," he told reporters in Thailand, where he is attending the Asia-Pacific Economic Cooperation summit. Kishida added that the missile likely landed in waters west of its northernmost island of Hokkaido, within Japan's exclusive economic zone.

Japan's military also issued a statement confirming the incident, saying "North Korea launched an ICBM-class ballistic missile from near the western coast of the Korean Peninsula" just after 10am on Friday.

The latest weapon test comes amid a record number of missile launches by the DPRK this year, and less than 24 hours after Pyongyang fired a short-range ballistic missile into the Sea of Japan. Ahead of that launch, Foreign Minister Choe Son-hui warned her country would take "fiercer" military action in response to a recent trilateral summit between Washington, Seoul and Tokyo, where the three allies agreed to strengthen security ties and continue their periodic joint war games.

Pyongyang has repeatedly condemned such military drills as preparation for an invasion, and insists its missile launches are a legitimate response to "provocations" from the United States and its allies in the region. Washington has likewise deemed North Korea's actions as provocative and demanded it cease all weapons tests.