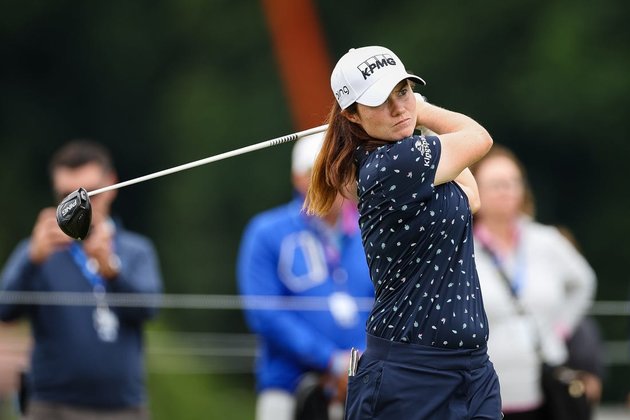 Leona Maguire of Ireland fired a 9-under 63 to surge into a tie for first place with frontrunner Lydia Ko Saturday at the CME Group Tour Championship in Naples, Fla.

Her round, which included nine birdies, was by far the best of the day, with no one else managing better than a 65 at Tiburon GolfClub.

"It was just really, really solid," Maguire said. "Gave myself a lot of chances, which I've been doing the first two days, but holed a nice birdie putt on the first and just kind of went from there."

That brilliance came on the heels of two solid, if unspectacular, rounds with matching 3-under scores Thursday and Friday. The weather, which was windy on Saturday and is expected to include rain and high gusts Sunday, could be a factor in allowing her to hold on to the win, which would be the second of her career and second this calendar year.

It wasn't lost on the Ireland native that bad weather to close things out could play in her favor.

"Yeah, I liked the weather today. It would be nice if we got another day like this," she said. "We'll just play whatever is in front of us tomorrow and go back to what it was when I was 15, 16 playing at home in Ireland."

New Zealand's Ko (2-under 70) faltered with a pair of bogeys in her first five holes before rallying with three birdies the rest of the way to save a first-place tie at 15 under, five strokes ahead of the rest of the field.

"After a couple of bogeys on the front nine to birdie the 8 and make a good up-and-down on 9 to kind of turn even, I knew that I played the back nine well the last couple of days, so I knew the birdie opportunities were there," Ko said. "And even if things don't go my way, I just wanted to stay patient and know that I can make hard holes into easy holes by just staying in that kind of mindset."

At stake for Ko is more than just a win in this event, but also the season-long points race that determines the Rolex Player of the Year, the season-long money title and the Vare Trophy for the season's scoring champion.

"I'm just going to go out there playing my game," Ko said. "That's what I tried the last three days, so none of that is going to change. Obviously there's a little bit of rain in the forecast tomorrow, so that will make the course a little bit longer, but other than that, I'm just going to stick to my same game plan and hopefully play some good golf."

Two golfers, Jeongeun Lee6 of South Korea (68) and Gemma Dryburgh of Scotland (69), are tied for third place at 10 under.

Lee6 credited Maguire, with whom she played Saturday, for a strong finish that included five birdies on the back 9.

"Oh, she played maybe perfect today, so every shot was good shot and putting was so good," Lee6 said. "So I was trying just following her. So, yeah, that's why I finished strong back nine."

The second-best round of the day was turned in by Canada's Brooke M. Henderson (65), who is tied for fifth with Sweden's Anna Nordqvist (70) at nine under.